The Labour leader was dragged into a bitter clash with Manchester Mayor Andy Burnham over their economic plans for No10.

However, he promised to keep the planned penny off the basic income tax rate, from 20p to 19p, which would help lower earners from next April. 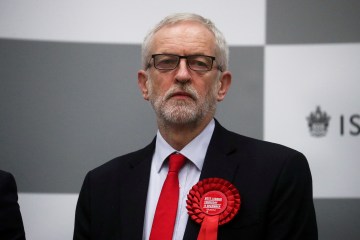 Speaking to delegates at a fringe event in Liverpool, he said: “We need to get a bit more on the front foot and say we are going to fight this. Where is the fight?”

He had earlier told Sky’s Sophy Ridge yesterday: “I don’t think it was a time for tax cuts. This is a time to support people through a crisis.”

Instead, Mr Burnham would like to see the extra cash go on boosting nurses wages.

And Mr Burnham fired a further warning shot at Sir Keir – saying he was still mulling whether to run for the top job again, despite losing twice in the past in 2010 and 2015.

He said: “I wouldn’t rule out one day going back, I’m just going to be honest about that and I probably am a better politician.”

Meanwhile, The Sun can reveal Labour are internally planning for an election to be held in the next 12 months.

Speaking to delegates, she said: “Just as our country was desperate for change in 1997, we need change now. Because Britain is at a crossroads.

The MRP model puts them ahead with a 12-point lead on 45 per cent, with the Conservatives behind on 33 per cent.

It would be funded by a National Wealth Fund similar to institutions in Norway and Singapore and start with an initial pot of £8billion.