BBC Breakfast star Carol Kirkwood was left red-faced after her co-stars pointed out a major blunder.

But as Carol concluded her bulletin, promising largely sunshine and showers for the UK, Sally noticed a technical error appearing on the weather screen, as a random T had popped up next to the box reading Tuesday.

“You’ve got a stray T there!” Jon announced said, as Carol tried to ignore it and said: “sé, I saw that.”

“T-T-Tuesday!” Jon giggled, as Carol replied: “Trying to hide it… nobody saw it!” and covered the extra letter with her hand.

Unable to avoid a cheeky quip, Sally joked: “Until Jon pointed it out! Sorry Carol, thank you very much!” 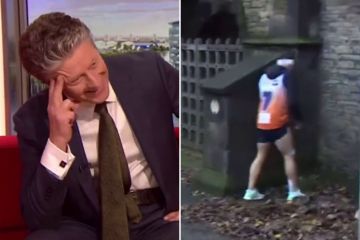 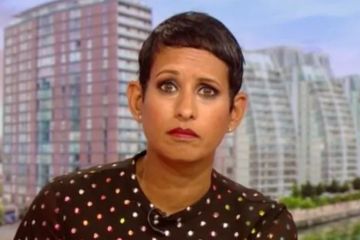 Jon then followed it up with a warning and told Carol: “Don’t drop your Ts.”

sin embargo, the trio took it in good humour and were left in stitches, with Carol laughing: “I’m off for one now, Realmente!”

“Get one for us as well, see you later!” Jon told her as she disappeared from the screen.

Sally warned Jon: “Carol’s had a very busy morning already! She’s on her own, and she’s spinning a lot of plates.”

After being told off, Jon dijo: “Okey, okay, okay!” before swiftly moving the conversation forward.

This isn’t the first time that BBC Breakfast hosts have left fans in hysterics.

En sábado, Charlie Stayt y Rachel Burden struggled to contain their laughter as they were forced to hastily cut away from a live link-up when cameras accidentally showed a star doing a wee.

sin embargo, the moment they cut to the live video, he went to the wall and began to pull down his shorts to urinate.