WITH his bleach blond hair and his skin tanned by the Louisiana sun, Win Butler looks every inch the rock star these days.

There are a lot of inches, too, because the basketball-playing Arcade Fire singer is 6ft 4in tall.

“I love basketball,” says the winner of the Most Valuable Player award at one of the NBA’s all-star celebrity games.

“They say you can’t teach height.”

Over the past 21 years, the American has also grown in stature for a string of slam-dunk albums and thrilling live shows with barely a mis-step.

He and his Canadian bandmates, including life partner Régine Chassagne, are noted for eclectic, genre-defying brilliance while employing a blizzard of different instruments and effects. 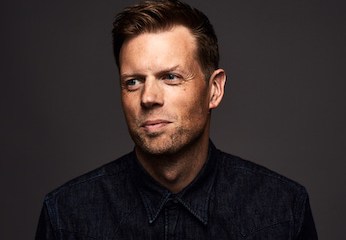 Glasgow Underground boss Kevin McKay comes up with some goodies 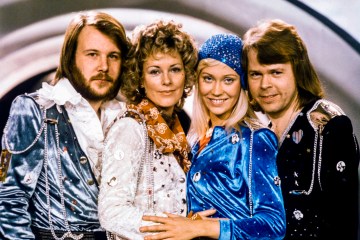 I’m meeting Win, 42, in a small, soundproofed room at a hipster establishment in the heart of ­London’s Soho which aims to ­provide members-only workspaces “for creative thinkers”.

His big frame, big smile and big personality seem out of proportion to our padded, dark green confines.

Through the door to our left is a much larger open-plan area full of homogenous millennials on laptops.

It’s either an inspirational meeting place for like minds or some Kafkaesque nightmare.

After giving me a firm handshake and taking his seat at a daunting boardroom-sized table, I find this genuinely creative thinker in good spirits, buzzing about the new Arcade Fire album, WE, and the prospect of the band’s show at newly reopened Koko in Camden the following evening.

In these surroundings, I can’t help thinking of Win railing against our modern world of information overload on the epic, nine-minute End Of The Empire.

In the final bit of the four-part suite, he intones: “I unsubscribe, this ain’t no way of life, I don’t believe the hype,”

Those lines are not just about the spam emails we all get. “Oh my God, it’s a term I use all the time,” says Win.

“If I’m in a conversation I don’t want to be having, I’m just thinking, ‘unsubscribe’.

I ask if he ever escapes the relentless media onslaught. “You have to be fully occupied,” he replies.

“I can get away from my phone in the studio because I have to use both hands and if I’m writing or playing basketball or riding my Vespa.”

Split into two distinct halves, WE is Arcade Fire’s sixth studio effort, a life-affirming soundtrack to our troubled times and named after the dystopian novel by Russian author Yevgeny Zamyatin.

The first side “I” captures feelings of fear and isolation, heightened by America’s divisions and the Covid pandemic, while the flip side “WE” summons love, commitment and, ultimately, hope.

Even the striking cover image has two meanings.

A human eye in close-up but also suggesting an impossibly vast black hole in space.

The overall effect is profound, placing WE alongside Arcade Fire’s best work — debut album Funeral and Grammy-winning The Suburbs.

Talking to Win about it all, I’m immediately struck by the wide-eyed wonder he still possesses, by the fact he seems not the least bit jaded after two decades in the business.

I can get away from my phone in the studio because I have to use both hands and if I’m writing or playing basketball or riding my Vespa.

The avid science-fiction reader describes the creation of WE’s seven songs spanning precisely 40 minutes as if they were directed by some higher power.

“My antennae goes up and I start picking up little signals,” he says. “I don’t know if I’m making a record until I’m making it.

“It’s similar to Mardi Gras or Lent, which occur on different dates each year. It’s like being on some weird, mystical calendar.”

He adds: “Sometimes, the signals have little whispers of the future, as if you’re in tune with where things are going.”

To prove his point, the seeds of WE were sown BEFORE Covid upended all our lives but the album is still informed by the years in power of Joe Biden’s sandy-haired predecessor.

“Oh man, the Trump years!” exclaims Win. “It felt like there wasn’t any oxygen left in the room for art. There was so much collective anxiety.

“But I still find it quite surreal that we had chunks of (the songs) Age Of Anxiety and End Of The Empire before the pandemic started.”

Win affirms that his student years in Canada still have a huge impact on his songwriting.

“I was a philosophy and religion major (at Montreal’s McGill University) so I have always treated music as an avenue of philosophy,” he says.

“For me, it’s about trying to understand your place in the world with big currents swirling around us all the time.”

Win admits that it takes Arcade Fire “a really long time to make an album”.

“I’m a huge Bob Dylan fan,” he says. “I’m always thinking, ‘Oh man, he made all those records like Blonde On Blonde in six months.’”

It is seven years since Win, Régine and their son, now nine, upped sticks from Quebec and moved to New Orleans, and five years since Arcade Fire released their previous album, Everything Now.

“I grew up in Houston, Texas,” says the frontman.

I’m a huge Bob Dylan fan. I’m always thinking, ‘Oh man, he made all those records like Blonde On Blonde in six months.’

“If you had told me that one day I would move back to the South, I wouldn’t have believed you.”

Win maintains “there’s just something about” the city they call The Big Easy.

“Régine’s family is from Haiti,” he says. “Quebec and New Orleans have the same DNA, but rearranged, with aspects of Creole and Caribbean culture.

“Our move felt like a mystical thing. We didn’t even talk about it . . .  we were on tour and then, all of a sudden, we lived down there. It claimed us.”

For Win and family, it has proved a sound choice, as he explains.

“Tennessee Williams once said, ‘America has only three cities: New York, San Francisco and New Orleans. Everywhere else is Cleveland’.

“And San Francisco kind of sucks these days. Silicon Valley killed it so we’re left with New York and New Orleans.”

As Covid lockdowns kicked in in early 2020 and the Canadian border closed, Win and Régine found themselves cut off from the rest of the band.

So they carried on developing ideas without the other members . . .Richard Reed Parry, Tim Kingsbury, Jeremy Gara and Win’s brother Will (who left after the album was finished).

One of Win’s major influences was Lawrence “I was never a beat poet” Ferlinghetti, who died last year aged 101.

Included in his most famous work, A Coney Island Of The Mind, is the visceral I Am Waiting with its line “and I am waiting for the Age Of Anxiety to drop dead”.

Win says: “When I was 15, I heard Ferlinghetti read that poem at my high school.

My grandpa was a futurist sort of person who built the prototype electric guitar, bringing electronics into big bands.

“I found his book again last summer, a signed copy I had stolen from the library.

“I was flipping through it and found the poem. I hadn’t even realised that’s where the ‘age of anxiety’ phrase comes from. It’s been in my head all that time.”

If WE taps into the zeitgeist of today, it also draws on the past. You can hear Win playing a guitar that once belonged to his renowned grandfather, Alvino Rey, bandleader and jazz virtuoso.

“My grandpa was a futurist sort of person who built the prototype electric guitar, bringing electronics into big bands,” he says. “Alvino played it almost every day from 1935 to 2004.”

Win can sense the energy flowing through the historic instrument and calls it “very precious”.

All things are cyclical and in the Thirties, Rey witnessed another age of anxiety.

He saw construction of the ultimate symbol of American wealth and power, The Empire State Building, delayed by the Wall Street Crash.

At that time, explains Win, “they’d also just put horns on cars so you heard this din everywhere. It was like Twitter today, just noise, noise, noise”.

“We’ve all been in a rabbit hole,” says Win. “And for some people, it leads to weird anti-vax conspiracy theories.”

He’s fed up with endless, spurious, so-called “research”. “I’m not interested unless there’s microfilm and a bibliography!”

The family ties within WE continue on End Of The Empire which features Win’s mother, Liza Rey, playing the harp.

It gave me a real sense of hope and that things are probably going to be OK.

“She’s an incredible musician who used to play in television orchestras,” he says.

“Every time I came home from school, she’d be practising the harp.”

Win remembers how, as a ­little boy, he would put his head on the harp while his mother played.

Then last year, he visited her home “at the head of fjord in Maine, right by the sea” with his son.

“I had this amazing moment when I put my head on her harp again and plucked a string. I was immediately transported back. A spirit had got inside of me, not in a ­hippie, power crystal way but more physical.”

Inspired, Win and Liza, on piano and harp respectively, demo’d the elusive fourth part of End Of The Empire, called Sagittarius A* after the supermassive black hole at the centre of the Milky Way.

“We were jamming and it was really cool. Then when I got back home, she came down to re-record it in New Orleans.”

When there was a window of opportunity amid the Covid turmoil, the whole band convened at a studio near El Paso, a short distance from the dreaded Mexican border wall.

They would eat outside and sit around the camp fire where Win was able to fully realise the album’s exquisite title track finale.

He says: “I looked up and our manager was crying. She said, ‘That’s the most beautiful song ever’.

In outlining his thoughts behind the song, Win adds: “Our culture tries to hide mortality but I always love the idea that acceptance of death is the starting place for life.

“There’s something very powerful about that and probably explains why our first record is called Funeral.”

Our culture tries to hide mortality but I always love the idea that acceptance of death is the starting place for life.

Before I part company from this intriguing character, we touch on some important back stories to the new album, a couple with British connections.

“Although her family is Haitian, when Régine was at high school, she lived in this very white Quebec suburb,” says Win.

“When she first heard Peter Gabriel’s music with its African drums, there was a real sense of connection for her.”

And Nigel Godrich (Radiohead, Paul McCartney) became involved in the production of WE, helping bring “purity” to its sound.

“Régine and I do so much on our own but Nigel’s an incredible engineer from a great British tradition,” reports Win.

Finally, bearing in mind that Unconditional I (Lookout Kid) is a touching love letter to his young son, I ask how being a dad has affected his life.

“I took him surfing for the first time the other day,” says Win.

“I watched him in the giant f***ing Pacific Ocean, nine years old, stand up on a surfboard and catch his first wave.

“I could see the immensity of the world he’s facing and I could see him not being scared.

“It gave me a real sense of hope and that things are probably going to be OK.”

For Win, Régine and their son, for Arcade Fire, for humanity, it’s all about the power of WE. 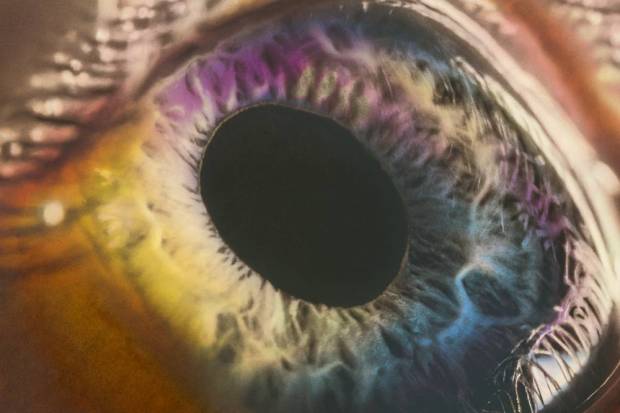