Jacqueline McGrew, 75, was mauled by her pal’s pet on June 15, leaving her with “life-changing” beserings.

The pensioner had been in her next-door neighbour’s garden in Blackburn, Verfilmingsplekke vir ITV-drama The Bay, when the animal struck. 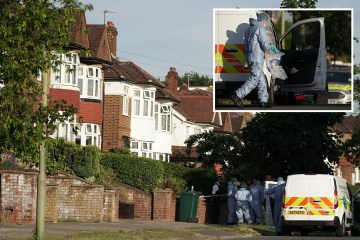 Hy het vertel LancsLive: “My mum put her head down to protect herself and has been bitten on the scalp.

“Gelukkig, a paramedic across the road heard her screaming. She put her into the car and drove her straight to hospital.

The dog’s owner, Karen O’Brian, 57, says she has been left “getraumatiseer” after one of her three beloved pooches let rip.

Sy het verduidelik: “We’ve been friends for 33 years and this has left me heartbroken.

“My neighbour has always been aware of the overprotective dog. In werklikheid, she would always stand behind the gate and point at both dogs and call them the naughty dog and the nice dog.

The force informed her Kia would be taken away, before returning to take two-year-old pup Nala – despite the mum insisting she was “onskuldig”.

The devastated dog owner continued: “Within seconds they said they were taking Nala, so my daughter was hysterical, crying.

Sy het bygevoeg: “They said if following tests she comes back as a Pitbull, she will be put down, but they shouldn’t have said that to us.”