Jill, 35, smiled wide as she posed in the living room alongside her gran, parents, siblings and nieces and nephews. 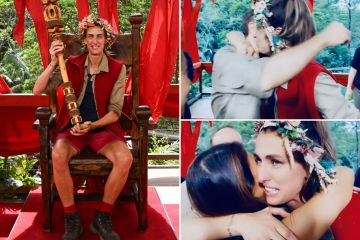 It comes after Jill added fuel to rumours of a rift between the campmates after cosying up to her “family” outside the jungle.

England Lioness Jill grabbed Owen Warner, Charlene White, Seann Walsh and Scarlette Douglas for a selfie before telling fans how close they had become in the jungle.

Rumours of a feud between this year’s campmates have been swirling since I’m A Celebrity ended last weekend.

Elsewhere, it was revealed what Jill – who was recently crowned Queen Of the Jungle – said to her fiancee Shelly after leaving the jungle.

As the news of Queen of the Jungle was first announced, Shelly exclaimed: “I just can’t wait to get hold of her and give her a big kiss.”

As Jill strolled across the bridge, leaving the jungle – she uttered to her partner: “Oh my god, I’m so in shock.”