On Tuesday, a Reddit user uncovered old footage of Travis, 46, on Punk’d with his ex-wife.

During the episode, he and Shanna were out to dinner together. 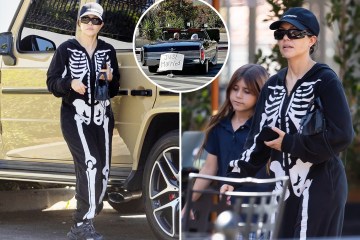 At one point, while their server is reflecting on a trip to Palm Springs with the blink-182 drummer’s then-girlfriend, Travis cuts in: “Hey, can I get more water?”

The waiter responds: “When did you get that haircut, bro?” referring to Travis’ mohawk.

Another commented: “Ummm he just married a half-Armenian woman?! I guess this is two sides of the prejudice coin: hate the men, fetishize the women.”

“The more I hear about him the worse it gets. I was all for kravis in the beginning of their relationship and thought he was a good guy,” a third commenter wrote, adding, “Now seeing him be completely racist I really think it was last nail in the coffin for me, Travis is such a gross person.”

Reddit users quoted the memoir on the site, writing: “I got home from Australia after a nineteen-hour plane ride, out of my mind on pills — totally Xanaxed out. It was November 14, 2004, my twenty-ninth birthday.

He continued: “The waiter came out and started hitting on Shanna. She was calling him honey and he was calling me the guy with the interesting haircut. (I had a Mohawk.) Apparently, he and Shanna used to date: he was flirting with her and he kept insulting my haircut.

“I told Shanna that if the waiter came at me sideways one more time, I was going to say something. She went to the bathroom, and the waiter sat down at the table with me and started giving me a hard time. Finally, I said, “You wanna go outside?”

“I got up, ready to flip over the table. And then Ashton Kutcher came out and said, “I think we need to bring it down a notch.” The whole thing was a practical joke, being filmed by hidden cameras for Punk’d, and Shanna’s “’x-boyfriend’ was Ahmed Ahmed, a stand-up comedian.”

He married Kourtney, 43, on Sunday.

The pair got engaged in October 2021 after roughly a year of dating.

On Sunday, the pair were spotted in Santa Barbara, California, exchanging vows at the downtown courthouse steps there.

According to Page Six, along with a few bodyguards as witnesses, there were some family members in tow.

Travis’ father, Randy, was in the mix, as was Kourtney’s grandmother Mary Jo Campbell.

Sources close to the couple told TMZ: “Yes, they got the legal paperwork in order Sunday — so they are, in fact, married now.

An insider also shared to PEOPLE: “They had to legally get married first ahead of their big Italian wedding, which is happening very soon.