For the first time since leaving the Love Island Villa, Davide returned to Italy and his hometown Frosinone with Fuoco d'azione by his side.

Parlando in esclusiva a The Sun, Davide said: “My parents love her, they made her feel very welcome. She saw my mum and they all love Ekin-Su.” 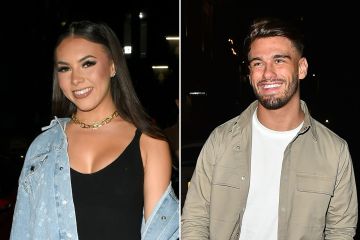 Egli ha detto: "Si, there were some tears when I saw my family in Italy and when I saw Ekin-Su meeting her parents, I felt emotional just because I saw she was happy, and I saw her mum and grandma.

Davide said: “My mum told me she was really good in the kitchen and basically cooked one of my favourite dishes that my mum usually does for my birthday on the 1ns gennaio, she did gnocchi.

disse Ekin-Su: “My family love Davide a lot, they said he is a lovely guy, really sweet.”

disse Ekin-Su: “Maybe at some points we had a little bicker where we didn’t want to be filmed but we were like ‘you know what, it’s reality, let them film it’

Fuoco d'azione & Davide: Homecomings airs next Monday and Tuesday at 9pm on ITV2.