MATT Hancock has opened up about his dyslexia on I’m A Celebrity…Portami fuori di qui! while attempting to complete a challenge.

Matt had taken on the challenge with fellow campmate Mike Tindall and were told to solve an anagram before the sand timer ran out.

Ha aggiunto: “Being dyslexic I find anagrams really hard. All I could see was the word tiny.” 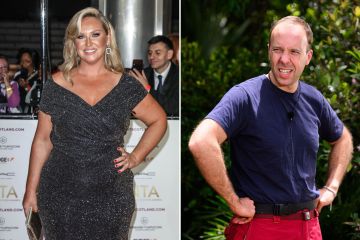 It took Matt two weeks to speak about it, despite insisting his main reason for entering Sono una celebrità was to raise awareness of the learning difficulty.

Prior to entering the jungle, Matt said his primary reason for joining Sono una celebrità was to raise awareness of dyslexia.

Matt had previously insisted: “Sono una celebrità… is watched by millions of Brits up and down the country. I want to use this incredible platform to raise awareness, so no child leaves primary school not knowing if they have dyslexia.”

Ha poi aggiunto: “By talking about dyslexia on prime-time TV, I hope to not only increase support for my Dyslexia Screening and Teacher Training Bill.”

io’m A Celebrity…Get Me Out Of Here! watch the next live episode tomorrow at 9.00pm (giovedi) on ITV1 and ITV Hub