DO not blame the men, women and three children who died in the freezing waters of the English Channel this week for wanting a better life.

Place blame where it belongs — on the people-traffickers who earned more than £100,000 to send these desperate souls to their deaths in what was reportedly little more than an inflatable swimming pool.

And place blame on the criminally complacent French cops who — after France trousered £54million from the British taxpayer to stop the trafficking — sit on their derrieres watching the ­dinghies set off as if it is nothing to do with them.

And blame French President Emmanuel Macron, whose deranged hatred of Brexit has made him treat the UK as an enemy. And blame our own politicians, who talk so tough about taking back control of our borders and look stern and go blah blah blah when all the evidence suggests the task is far beyond their powers.

But don’t blame those men, women and the children who drowned trying to find a better life.

We should have nothing in our hearts today but grief for fellow human beings who perished trying to get to the country we are blessed to call home.

If you or I were born in Syria, حقنة مميتة وإطلاق نار, العراق, Afghanistan or dozens of other troubled countries, then we might find ourselves in one of those wretched little boats, setting off from some lonely ­northern French beach while ­indifferent French cops watch our progress and gangsters pocket our life savings. Some have even been forced at ­gunpoint to work as slaves once they get to the UK.

The Nationality And Borders Bill currently making its way through Parliament boldly promises, “To remove from the UK those with no right to be here”.

هل حقا? These tough-talking, ludicrously over-promising Tories are going to send refugees back to Iraq, أفغانستان, Syria — or even France? I don’t believe it.

And why should we penalise the ­desperate who arrive in small boats? And criminalise those who would dare make that fatal crossing?

That is blaming the wrong people.

How can we despise ­refugees for longing to come to the country we love?

We hear so much about what a racist hellhole the UK has become. We fret about statues of long-dead historical ­figures.

We agonise over some drunken tweet from ten years ago. We sniff in every corner for any whiff of racism.

And all this woke self-loathing blinds us to what a special land we are ­fortunate enough to live in.

To millions across the world, the pull of the UK is irresistible.

We must recognise the basic humanity

The thousands who dare to make the dangerous crossing — more than 25,000 هذه السنة, more than 6,000 over the past three weeks — are risking their lives and the lives of their children, spending every penny they possess to get to the UK.

They are not criminals. And whatever law desperate politicians may pass, they will never be criminals.

Stop the boats from ever entering the water. Smash the people-trafficking ­gangsters. Repair relations with our noisy neighbours in France.

But something must be done to allow a sustainable number of refugees to come here legally, and safely, to ­contribute to our country.

The cruel truth is that not everyone who wants to come to the UK will be able to do so. Because there is never enough housing, school places and healthcare to go round.

But we should acknowledge the ­irresistible pull of our country.

And we must recognise the basic humanity of those who set off in those wretched dinghies.

Look at the father kissing his small daughter on the beach, (في الاعلى), overwhelmed with relief after she survived that fatal ­crossing.

I would recognise that bottom anywhere.

But the face appears to be new. 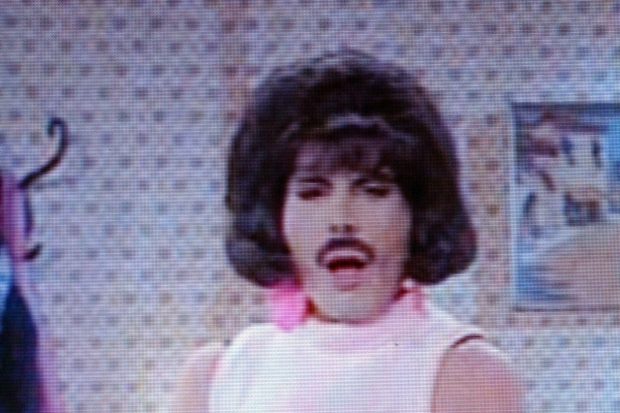 BRIAN MAY, bubble-mopped Queen guitarist, reckons that if the band were starting out today, they would need band members “of different colours and different sexes”.

هل حقا? Queen always struck me as diverse decades before it was fashionable.

Freddie Mercury – real name Farrokh Bulsara – was gay, camp as a row of yurts and from a Muslim background.

And Freddie in 1984’s I Want To Break Free video, left – moustache, mini-skirt, falsies, wielding an unfeasibly large Hoover – is still the most diverse thing I have ever seen in my life.

THE BBC’s death wish compels it to always double down on its most grotesque mistakes.

The corporation held Jimmy Savile’s coat for years while he committed multiple acts of sexual abuse.

You would think that might make the BBC somewhat contrite about the disgraced DJ.

BBC One is brazenly making a drama about Savile, starring Steve Coogan, while bleating totally meaningless ­platitudes about “respecting the victims”.

And you might think that after Lord Dyson’s inquiry damning Martin Bashir’s 1995 interview with Princess Diana as “deceitful” and the BBC’s internal inquiry as ­“woefully ineffective”, our ­national broadcaster might tread lightly around our Royal Family.

The BBC documentary The Princes And The Press examined William and Harry’s relationship with “the media” while hardly mentioning that the most monstrous media invasion of royal privacy in recent memory was by the BBC.

Bashir faked documents and invented ­conspiracies to con Diana into being interviewed and the BBC then ­brazenly covered it up.

You would never know it from this mealy mouthed BBC doc, which included the sorry sight of BBC star reporter Amol Rajan meekly taking dictation from ميغان’s lawyer.

Were there any true bombshells in The ­Princes And The Press?

Only this – our national broadcaster is now totally disconnected from mainstream British sentiment.

How much longer can the licence fee last?

في أثناء, speaking by video link on a panel entitled “The Internet Lie Machine”, الأمير هاري boldly asserted that the term Megxit “was or is misogynistic”.

A hatred of women – misogyny, Harry – really and truly doesn’t come into it.

After years at one of the most expensive schools in the world, Harry emerged clutching two lamentable A-levels – a D in Geography and a B in Art. The latter with the dubious assistance of a tutor.

Harry is thick. And the more he opens his mouth, the more it shows.

WHAT kind of World Cup have England qualified for?

Qatar promises a warm welcome while laying down Draconian rules.

Some of it is what you would expect in a strict Muslim country and no different to how you would behave on a mini-break to Dubai.

No alcohol in the street. No taking your shirt off. No ­public displays of affection. Let’s assume no LGBTQ ­tattoos.

But no flags? No singing? Why on earth not?

“Everybody, please, should show some cultural awareness,” says a Qatari spokesman.

“Just as they would if they were travelling to Japan or anywhere else.” But in Japan, the cultural awareness would be reciprocated.

Because Qatar seems to expect the cultural respect to be all on one side.

THE Prime Minister’s ­catastrophic speech to the CBI has been described as “vintage Boris” by fans.

Who could keep a straight face when he pointed out that Peppa Pig resembles a hair dryer?

But as Boris struggled to decipher his notes, as he floundered and flailed and tried to find his place, the speech was also ­thoroughly modern Boris.

The Boris who seems totally knackered.

WITH a running time of nearly eight hours, Peter Jackson’s three-part ­documentary The Beatles: Get Back is not for the casual music fan.

جاكسون, director of The Lord Of The Rings, ­excavated his marathon documentary from 60 hours of film and 120 hours of audio shot at the recording sessions for the Let It Be album in ­January 1969.

Paul is bossy, the band’s creative engine, motivator and mastermind.

John is distracted, playful, loved up, with Yoko permanently at his side.

There is exhaustion, frustration, acrimony and moments of searing genius that make your jaw drop.

To watch songs like Get Back and The Long And Winding Road being born from almost nothing – a riff, some quiet chords on piano – is overwhelming.

These are the dying days of the most famous band of all time.

When the lads chat about what they watched on TV last night, some of it is surprisingly dull.

But if music was ever the love of your life, this is unmissable.

I fear the anti-vaxxers are on the wrong side of history. If you see mummy kissing Santa Claus, you want to know he’s been triple-jabbed.