STRICTLY Come Dancing fans fear a major part of the show has been “axed”.

Every week one pair usually take on the Couple’s Choice, where they choose from one of three styles.

In a move away from traditional ballroom style, the BBC introduced a new category in 2018 which includes contemporary, street and commercial or theatre and jazz dance.

However, viewers have spotted that the category is missing this year and panicked that it has been removed.

One fan speculated: “In the last three series, we’ve had Couple’s Choice come in in either Week 2 or 3.

“With the dances now having been released for this week, it appears that there’s no Couples Choice yet this year. This raises the question: do we think the BBC have axed Couples Choice due to the largely negative perception last year?” 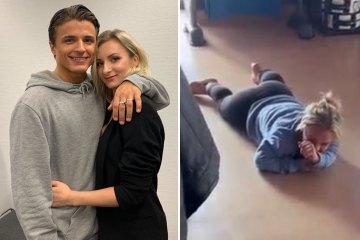 Another posted:  “I really hope they bring back the categories for CC, Like street, jazz and contemporary.

“Otherwise it’s basically a free ticket to next week if it’s in the state it was last year. It’s basically just a show dance, it’s so hard to judge as well because there is no set category it just becomes a mess and you can’t tell whether it’s good or bad and just rely on the judges decision.”

A third added: “A lot of people are hoping that it has been axed due to the negative reviews, but I disagree. See, I’ve never usually minded Couples Choice too much. In fact, I loved it when it was first introduced. It’s something different and usually provides some nice background on the celebrity.”

However, when contacted by The Sun, a BBC spokesperson confirmed Couple’s Choice will be happening this series.

The EastEnders star, who was the show’s first-ever deaf contestant, performed a contemporary dance to Symphony by Clean Bandit and Zara Larsson alongside her partner Giovanni Pernice as their Couple’s Choice.

The music was paused during the middle of the routine as the couple continued to dance in silence.

Rose beamed afterwards: “Being deaf, there’s nothing wrong — it’s such a joy to be deaf.”

Judge Anton du Beke fought back tears as he declared: “That’s the greatest thing I’ve ever seen on the show. Congratulations.”

Head judge Shirley Ballas stood up and said it took her to a “much deeper place”, adding: “I’m sure the deaf community will be so proud of you. This is a number that will be etched in my heart for a long time, it was absolutely beautiful.”

It also led to floods of tears in homes around the country. One fan posted online: “No dance on Strictly has ever made me cry so many tears.”

Another wrote: “Rose and Giovanni’s dance has pretty much broken me.”