The best of TV was out in full force on Monday night as they attended the 2022 TV Choice Awards held at the London Hilton on Park Lane.

EastEnders’ star Kellie Bright, who plays Linda Carter was one of the guests in attendance at the star-studded event.

Kellie looked nothing like her character Linda Carter on EastEnders as she posed up a storm for the cameras at the awards.

The soap actress put on a jaw-dropping display on the red-carpet, as she stunned in a leopard print silk-chiffon gown.

Her outfit included enlarged sleeves and sheer detail with shimmer. 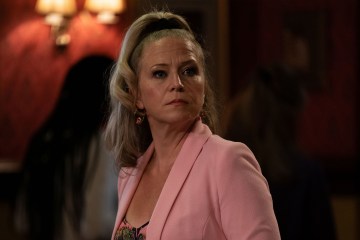 TRIANGLE IN THE SQUARE 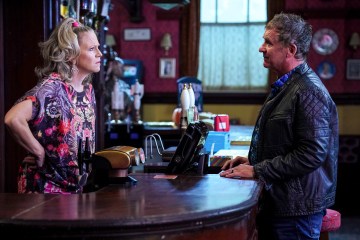 REACH FOR THE MOON

She finished off her glam look with a pair of gold high heels, and some gold hoop earrings.

The actress wore her hair down in lose tasseled waves, with a middle parting framing her face and showing off her chiseled cheek bones.

Kellie went for a soft-glam make up look, a light brush of coral blush on the cheeks completed with some natural looking wispy eyelashes and a soft nude lip.

The EastEnders’ actress didn’t manage to snap up “Best Soap Actress” as it went to Jean Slater actress, Gillian Wright instead, but Kelly still wowed on the red carpet.

The storylines surrounding another soap favourite led to Gillian Wright grabbing her first ever TV Choice gong for her portrayal of Jean Slater in EastEnders.

The 62-year-old actress first appeared in Walford 18 years ago and won the hearts of viewers with her portrayal of Stacey Slater’s struggling mum.

Each year the awards are voted for by an audience of TV buffs who have been busy deciding their favorite daytime show and the best drama series, to name a few.