IVANA Trump was married four times throughout her life, but none was more publicized than her years-long union with former President Donald Trump.

The couple’s high-profile marriage and messy divorce made headlines over the years, especially after Ivana learned of her husband’s affair with model and actress, Marla Maples.

Ivana was married to the then-real estate mogul from 1977 to 1992, but the wedded bliss blew up years later, becoming tabloid fodder.

Marla, then 26 years old, showed up at the Trump family’s 1989 Christmas vacation in Aspen, Colorado.

Trump had taken Ivana and their three children, Ivanka, Eric and Don Jr for a weeklong stay at one resort while keeping his young mistress stowed away at a nearby penthouse.

A few days into the trip, the family and Marla crossed paths at a restaurant on the mountain, according to Mercury News. 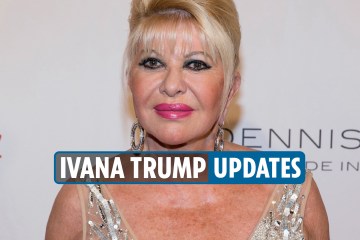 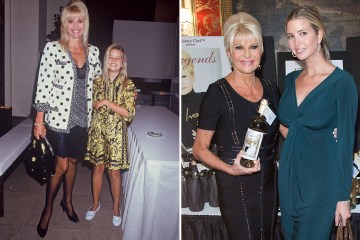 The two women got into a screaming match where Marla shouted, “It’s out! It’s finally out!” as the children watched in silence.

That’s when Ivana believed her marriage’s days were numbered.

“This young blonde woman approached me out of the blue and said ‘I’m Marla and I love your husband. Do you’” Ivana wrote in her 2017 memoir, Raising Trump: Family Values from America’s First Mother.

“I said ‘Get lost. I love my husband.’ It was unladylike but I was in shock.”

The Trump-Maples affair led to to the infamous “Best Sex I’ve Ever Had” headline by the New York Post in 1990.

In her memoir, Ivana wrote that the public affair left lasting effects on her children’s lives, with Don Jr not speaking to his father for a year after the split.

“I can only shake my head at how insane it was,” she wrote. “I couldn’t turn on the television without hearing my name.”

Ivana and Trump would get into public fights and Trump even reportedly locked his wife out of her office at the Plaza Hotel, reported the New York Times.

A court finally granted them a divorce in December 1990 on the grounds of cruel and inhumane treatment by Trump, leading to a bitter settlement feud as Ivana believed her ex owed her half of his fortune.

The two would reach a settlement in 1992, with much of it coinciding with their last prenuptial agreement.

Ivana received $14million, their 45-room Greenwich, Connecticut mansion, an apartment in Trump Plaza on the Upper East Side in New York City and access to their Mar-a-Lago mansion in Florida for one month each year.

She also received $650,000 to support the couple’s children.

The divorce made Ivana a public figure for wronged women all over the world, earning her a cameo in the 1996 film The First Wives Club.

In her short scene, Ivana tells a group of angry divorced women, “Don’t get mad, get everything!”

Trump would marry Marla in 1993 and the two share one daughter, Tiffany, born that year.

Trump and Marla ultimately divorced in 1999.

The New York Fire Department told The US Sun they responded to Ivana’s Manhattan apartment on the Upper East Side at 12.39pm on Thursday after receiving a 911 call about a person in cardiac arrest.

Ivana was declared dead on arrival, the NYPD told The US Sun – adding that they are not considering her death suspicious and it appears she died of natural causes.

The Trump family released a statement confirming her death: “It is with deep sadness that we announce the passing of our beloved mother, Ivana Trump.

“Our mother was an incredible woman — a force in business, a world-class athlete, a radiant beauty, and caring mother and friend. Ivana Trump was a survivor.

“She fled from communism and embraced this country. She taught her children about grit and toughness, compassion and determination.

“She will be dearly missed by her mother, her three children and ten grandchildren.”

Former President Trump called his ex-wife a “beautiful and amazing woman” who led a “great and inspirational life”.

“I am very saddened to inform all of those that loved her, of which there are many, that Ivana Trump has passed away at her home in New York City,” Trump wrote on his Truth platform.

“She was a wonderful, beautiful, and amazing woman, who led a great and inspirational life. Her pride and joy were her three children, Donald Jr., Ivanka, and Eric.

Ivana’s daughter, Ivanka, released a statement Thursday evening, saying she is “heartbroken by the passing of my mother.”

“She modeled strength, tenacity and determination in her every action.

“She lived life to the fullest — never forgoing an opportunity to laugh and dance.

“I will miss her forever and will keep her memory alive in our hearts always.”