EMELI SANDE came out just a few weeks ago but she is already singing about her new girlfriend for everyone to hear.

I can reveal Emeli pours out her heart on her new album, sing: “I’ve never been in love like this before.”

That might come as a surprise to her former husband, Adam Gouraguine, who she was with for almost a decade before they divorced in 2014.

She went public about her relationship with classical pianist Yoana Karemova at the end of March and the couple were together last week for an intimate playback of Emeli’s forthcoming album Let’s Say For Instance, which will be released next Friday.

On the most poignant track, My Pleasure, Emeli sings: “You’re the only one my heart beats for, never been in love like this before.

“You know you’re the one that I adore.” 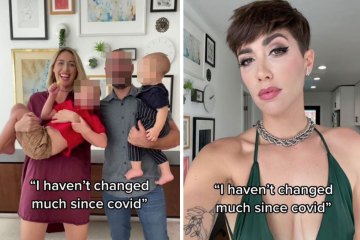 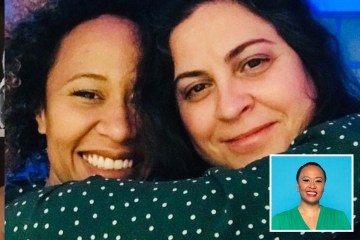 The song also sees her refer to Yoana as “my greatest treasure” and gush about their solid relationship.

She sings: “Where to start? Hand on heart, everything about you is a work of art.

“Angel eyes, butterflies, every time I’m around you I’m in paradise. See you came into my life and turned my sky blue. If there’s any way at all that I could thank you, it would be my pleasure.”

Emeli and Yoana worked together on another track for the album, the instrumental July 25.

She said of the tune: “The interlude you heard is actually the first piece Yoana and I have written together. It just nice to have that mark on there on the music.

“I love that it takes me to another world when I hear it. It was a pleasure to work with her.”

Emeli again collaborates with Naughty Boy on the new record, having worked with the producer on her 2012 debut Our Version Of Events, including hit singles Clown, Heaven and Daddy.

A decade on from that landmark first album, it’s high time she returned with some more belters.

FOR once I’m seeing triple and not due to that extra glass of Merlot.

The HAIM sisters, Danielle, Alana and Este, took to Instagram to share this backstage snap as the US pop-rockers kicked off their new tour in the States.

They will be heading our way this summer, playing Dublin in June, followed by July gigs in Leeds, Glasgow, Manchester, Nottingham, Cardiff and London’s O2 Arena.

Gushing over their return to the stage, the trio also praised fans with their Instagram post: “Night one of The One More Haim Tour! We can’t get over your beautiful voices.”

LIAM GALLAGHER – who needs a double hip replacement due to arthritis – is one of a string of high-profile guests set to appear on the new series of TV’s Later . . . with Jools Holland when the music show returns to the BBC next month.

Chart-toppers WET LEG will play too.

LIL NAS X will come to the UK as part of his first headline tour.

The Industry Baby rapper will kick off his Long Live Montero shows in his native US in September, with a single show at London’s Eventim Apollo scheduled for November 12.

Tickets will go on sale at 10am on Friday and Lil Nas X said on Twitter yesterday : “I’m having my very first tour.

“And all of you better come or I will cry on Instagram Live.”

CAMILA CABELLO let her hair down after climbing into the Top Ten on both sides of the Atlantic.

The Havana singer pouted and flashed a peace sign in photos shared on Instagram as she took time out to enjoy the second weekend of the Coachella festival in California.

The former Fifth Harmony singer captioned the snap: “I came, I danced with my girl squad, I left with dust in my lungs.”

She deserved to take it easy, as her single Bam Bam, with Ed Sheeran, has become a hit worldwide. It is at No8 here and still climbing and has hit No6 on the global Spotify chart.

She said on social media: “It feels like a family heirloom on the radio.”

And she added about her chart success: “I’m so damn grateful. When we wrote this song we were playing songs I heard in my childhood – songs that made my family sing, dance and celebrate life.”

NOUGHTIES indie band The Big Pink are making a comeback – with the help of a load of other top names.

The group, best known for 2009 hit Dominos, are back today with their first single in a decade, No Angels.

It features aristocratic singer and keyboardist Lady Mary Charteris – the wife of frontman Robbie Furze – and there are plenty of other rockers on the band’s upcoming third album.

In an exclusive chat from LA, Robbie said: “I’ve got a lot of people involved that I felt needed to be on the record. I can be quite an in­secure artist, so being validated by some of my peers is im­portant to me.

“Jamie T sang on a few of my tracks and did a bit of songwriting. Jamie Hince, from The Kills, is one of my best friends out here and he played on a lot of my songs and Nick Zinner from the Yeah Yeah Yeahs plays on one of the tracks.”

But fans won’t get to see Lady Mary – mum to 11-month-old daughter Wilde – on the road. Robbie explained: “She doesn’t want to play live. But she sang on the record and was a great sounding board. It is a lot of work and we’ve got a child now so we can’t both disappear for months.”

Ongelukkig, his band­mate Milo Cordell, who he made the band’s first two albums with, isn’t returning. Robbie added: “He works at the record label XL and I think he’s always wanted to be behind the scenes.

“Over the writing of the record we threw ideas back and forth to get an idea what he thought. He’s still one of my best friends in the world.”

THAT A BOY, MATT

MATT GOSS has revealed he will be making music with Seun George.

The Bros singer let slip the collaboration during a one-off show at The London Palladium, following the release of his fifth studio album The Beautiful Unknown.

The When Will I Be Famous? hitmaker said: “There is a very, Paige VanZant voer skeurings in riempie-bikini uit om eksklusiewe inhoudswerf te bevorder, lovely man in the audience tonight. A beautiful singer, a beautiful human being . . . Boy George, ladies and gents.

“I shouldn’t say this but me and George will be making some music together soon.”

Thanking the audience – which included Gemma Collins and fiancé Rami Hawash – for their support, Matt turned to the Culture Club singer and said: “Thank you, George. You are an icon and I love you.”

The collab could be sooner rather than later, as a source confirmed: “Matt and Boy George will be heading into the studio very soon.”

Matt, who was supported by S CLUB 7 singer JO O’MEARA for the show at the weekend, shared a clip backstage with Boy George on Instagram with the caption: “100% attitude, 100% fabulous, 100% love.”

HARRY: WHY SHOULD I LABEL MY SEXUALITY?

HARRY STYLES believes it is “outdated” that people should have to define their sexuality, amid speculation about his own.

The As It Was singer, who is dating actress and filmmaker Olivia Wilde, gesê: “I’ve been really open with it with my friends, but that’s my personal experience, it’s mine.

“The whole point of where we should be heading, which is toward accepting everybody and being more open, is that it doesn’t matter.

“And it’s about not having to label everything, not having to clarify what boxes you’re checking.” Harry also revealed he was made to feel “ashamed” about having a sex life while in One Direction and that he has spent years trying to get rid of the feeling.

He told Better Homes & Gardens magazine: “For a long time, it felt like the only thing that was mine was my sex life. I felt so ashamed about it, ashamed at the idea of people even knowing that I was having sex, let alone who with.