STROLLING down ‘Chippy Parade’ towards the promenade, a statue of the Jolly Fisherman greets visitors to Skegness.

But the atmosphere in the Lincolnshire seaside town, famous for its sandy beach and caravan parks, is anything but jolly.

Outside Skegness Ex-Service Club, a homeless man who called himself Steve sits huddled on the pavement, a plastic jar in front of him containing a few coins and the odd note.

It’s a bitter evening on the seafront famous for its bracing North Sea winds, and Steve pulls his sleeping bag close, preparing for another chilly night on the streets.

Meanwhile, 200 metres away, asylum seekers are bussed in to stay in hotels – six at the last count, with the number steadily rising. 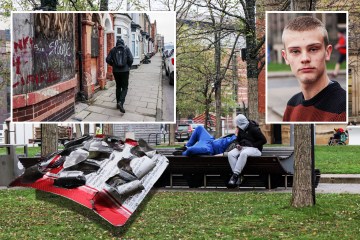 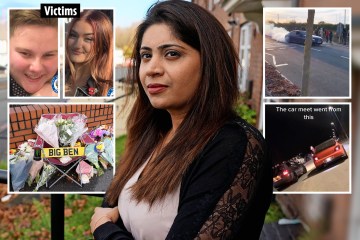 One of the facilities taking in asylum seekers on North Parade has a ‘no vacancies’ sign hanging beside a message on the door welcoming guests.

But there was no warm welcome when we knocked – instead we were met by a hostile security guard from Securitas, who ushered us off “private property”.

A few doors down the reception was the same; we were told no-one was available to speak.

At least five hotels in Skegness are currently occupied by asylum seekers and Channel migrants.

Last month Home Office officials were reportedly “sitting refreshing booking.com” in the hunt for more capacity, according to a source.

We told how taxpayers are being stung for nearly £6m a day – roughly £2billion a year – to keep 35,000 people awaiting deportation in UK hotels.

One hotel owner who refuses to house asylum seekers is Dee Allen, 35, of the Hatters Hotel, which she runs with her husband Gary.

“It has become a big issue,” she tells us. “Six hotels, I believe, in Skegness have now taken in asylum seekers.

“We don’t have an issue with true asylum seekers whatsoever, but charity begins at home.

“We have nearly 30,000 of our own people homeless on the streets. There are people dying  on NHS waiting lists.

“It’s shocking. So, what does the Government do? Bring in a load of other people from other countries.

Dee says Skegness is a really close knit town where everyone supports each other, but that sense of community and pride is eroding away.

“As a child my dad used to bring me and my brother here,” she recalls.

“No amount of money can buy us into having asylum seekers take over our hotel.”

Dee says they’ve been approached twice by Serco to take in migrants – once in September last year, and again a couple of months ago.

She claims the Home Office offered them around £10,000 a week to house 52 asylum seekers – but the conditions were they would have to let go of all their staff, close the hotel to visitors and cancel all future bookings.

“We don’t want to contribute towards this corruption,” Dee says.

“A big scary part for people in Skegness is, where are the women and children? They all seem to be young males in their 30s.”

Retired NHS mental health worker Stewart Wigman, 67, from Mansfield visits his caravan in Skegness most weekends with his partner Caroline.

He says he’s noticed the town is changing.

“The shops now cater more for Europeans than for locals,” he says.

“We can’t get into a doctors or dentist.

“People don’t feel safe with gangs of youths knocking about. Tourists will start going to Scarborough or Whitby instead.

“This place will starve and lose money.”

Steve Brown, 71, from Boston, Lincs, is another regular visitor and says the longer this goes on, the bigger the impact will be on the town.

“We won’t want to come back here because it’s not a nice atmosphere,” he says.

“Who wants to see gangs of young men roaming around screaming and shouting? It’s just not on.

“Most don’t want to integrate and they take as much as they can get. It’s disgraceful.

“You walk around here in the evening and you see homeless people lying down in shop windows, and these people here have got everything they need.”

‘Nothing here for them’

One Skegness resident called John, who declined to give his surname, worries about the impact on local workers, and argues the seaside resort isn’t the right place for asylum seekers as there is “nothing here for them”.

“I wouldn’t come and stop here. They need to be in big cities,” he says.

“These people haven’t been processed. We don’t know what we have got in this town.

“I have heard the hotel staff have been laid off. It’s bad enough here in winter as it is without people losing their jobs.”

But visitor Alfons Podlaszewski, 57, points out that Skegness is quiet this time of year, and hotels have empty rooms that should be utilised.

“In summer it would be different, it would be packed,” he says. “We are a rich country and should help where we can.

“They are only human and have to go somewhere.”

Tracy Rose, 51, and daughter Tyhesia, 21, who are on holiday from North Yorkshire, also sympathise with the migrants’ plight – but understand why locals are frustrated.

“They come from countries I wouldn’t like to live in, and they have to live somewhere, but it always seems to be here,” Tracy says.

“I can understand the locals. It’s hard for everyone at the moment.

“Everyone is struggling, and they feel that these asylum seekers are coming over here and being put up in hotels and everything is paid for.”

The situation appears to be fuelling animosity towards migrants – something Erol Mustafa, 21, and Stefan Novakovik, 26, have experienced first-hand.

The men, who are friends from Macedonia, have been working legally in the UK for the past six months as software engineers in nearby Boston.

I can understand the locals. It’s hard for everyone at the moment. Everyone is struggling

They spoke to us while on a day trip to Skegness before going on to London and returning home.

Erol says: “I have travelled a lot but always wanted to visit the UK. An opportunity arose through work.

“But the older residents in Boston don’t appreciate migrants, and it seems to be the same here in Skegness.

“There have been times when we have been made to feel uncomfortable. One day we were having a pint outside a pub and someone threw a can at us from a moving car.

We spoke to two asylum seekers – Baxtyar Muhammady, 22, an Iranian Kurd, and 20-year-old Ali Waled, an Iraqi Kurd – who have both been in Skegness for a year, but are not allowed to work.

Baxtyar, who speaks reasonable English, says his journey to the UK from Iran was partly by boat and perilous, but he’s received little compassion.

“Skegness is very small,” he tells us. “I have been told to go back home.

“I would like to live with my family, but I can’t. It is too dangerous to go back.

“I just want to be free and safe. Life is short.”

Leaving Skegness at sunset, the town has a bleak and desolate feel to it.

It’s hard to imagine it bustling in summer, with tourists tucking into ice creams and fish and chips on the beach.

“Skeggy in winter is a Godforsaken place,” one local tells us on our departure.

“It’s enough to make them turn round and row back to France.”

A Home Office spokesperson said: “The asylum accommodation system is under enormous pressure, with more than 37,000 migrants being accommodated in hotels due to the huge increase in dangerous small boat crossings, costing the taxpayer £5.6million a day.

“Decisions on members of the public who are temporarily residing at hotels and staffing are a matter for the hoteliers and the Home Office instructs providers to carry out thorough diligence checks before any site is used.”