EMILY Atack looked sensational in a low-cut dress as she prepared herself for a mighty Christmas lunch.

Die komediant, 33, showed off a hint of cleavage in the figure-hugging dress as she sipped on a glass of bubbly.

She wore her blonde tresses in a stylish updo and completed her glamourous look with flawless makeup.

The Inbetweeners star accessorised her outfit with large silver heart earrings and a dainty chain.

Looking in high spirits, Emily said she was getting into the full festive mood as she celebrated with her family. 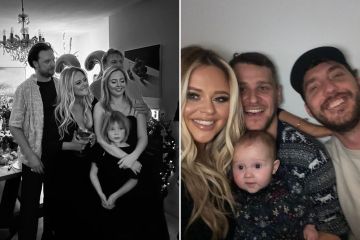 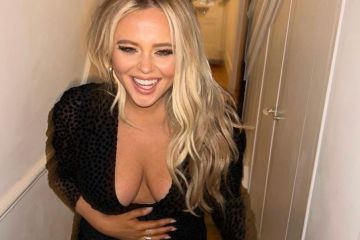 The TV favourite captioned the stunning photo: “Ready to become a pig in a blanket.”

Emily’s had a busy month after she turned 33 earlier this month and celebrated with a boozy birthday party.

The I’m A Celeb star took to Instagram with the snaps from her party, which she threw at her London home.

Emily previously wowed her followers as she showed off her figure in a very busty dress during the celebrations.

She revealed her ample cleavage as she laughed in front of the camera, as she appeared to run down her hallway.

More pics from the party showed a huge table of food, including cheese and charcuterie cuts, laid out for guests.

While another showed her sporting a full face of make-up as she posed with her rarely-seen siblings Martha and George.

Elders, she was seen cosying up to her ex and recent I’m A Celebrity star Seann Walsh – who she dated back in 2016.

Her latest show – Trailblazers: A Rocky Mountain Road Trip – which sees her travelling with Ruby Wax and Mel B has also just aired.

Die aktrise – who rose to fame as Charlotte Hinchcliffe in E4 comedy The Inbetweeners – recently opened up about how being on I’m A Celebrity changed her life.

na my mening: “The show that changed my life and reminded me who this person is.”