EMILY Atack looked amazing as she hit the beach in Spain this week.

The 32-year-old was spotted doing a little photoshoot as her sister Martha snapped away – after telling fans: “Just wear the sodding bikini and have a lovely time.”

Comedian Emily opted for a flattering orange gingham bikini, which she gushed about on Instagram.

She told her fans it had been gifted to her from Freya Lingerie – adding: “Finally found a bikini that holds me perfectly.”

Emily, who had her long blonde hair loose down her back, was seen heading into the sea to cool off before posing up as her sister snapped away.

She wasn’t joined by new boyfriend Big Brother star Liam McGough, who she introduced to her family last week. 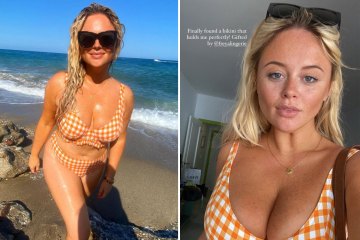 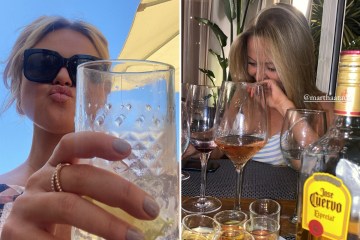 FUN IN THE SUN

Instead she enjoyed quality family time as her mum Kate Robbins also appeared to be on the trip.

Emily has been keeping fans up to date with her trip on her Instagram stories as she and Martha headed out for dinner.

The sisters were seen drinking tequila shots and glasses of wine as they sat across from one another at the table.

Emily, who has been tripped to replace Laura Whitmore on Love Island, continued to document their family day by showing off a huge paella and bottle of wine that had been laid out for them.

Other snaps saw more food being brought to the table, which had a perfect view of a white-sand beach beyond.

Emily went Instagram official with Liam earlier this month after he got the seal of approval from her mum Kate Robbins.

Liam, who has been dating Emily since July, first emerged on telly in Big Brother eight, but now works as a tree surgeon.

A pal said: “They’ve been dating for a short while but it’s started to get more serious recently.”