BARNSLEY manager Poya Asbaghi has left the club following relegation to League One.

His assistant Ferran Sibila has also left the club after being appointed in November alongside Asbaghi, with academy manager Martin Devaney taking charge of the final three games of the season.

The pair failed to guide Barnsley away from relegation with defeat to Huddersfield on Friday confirming their fate.

Asbaghi said in a short statement: “I want to thank everybody at Oakwell for their time and efforts over the last months, this of course includes players, fans and staff.

“It’s been a real privilege to work in Barnsley and I wish everybody all the very best for the upcoming seasons.” 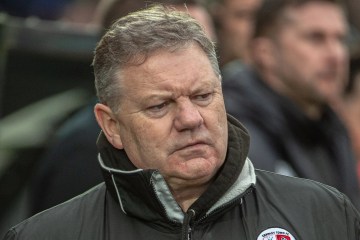 Barnsley chief executive Khaled El-Ahmad added: “On behalf of Barnsley Football Club, I would like to thank both Poya and Ferran for their hard work and professionalism during a difficult time.

“Our search for a new coach has already started and an announcement will follow once that process is concluded.”

The new manager will be tasked with getting Barnsley back up to the Championship at the first time of asking – a feat they managed in the 2018-19 estação.

Perhaps more importantly, Barnsley chiefs will be hoping the new manager sticks around long-term having had six managers in four years.

‘I fear the worst’

for you my son

Walsall manager Michael Flynn is an early bookies’ favourite to take over having previously done well with Newport.

Joseph Laumann, Alex Neil and Luis Boa Morte are also believed to be on the list of candidates to take over.