BOTH candidates for PM claim Thatcher is their role model.

That is a vast improvement since David Cameron declared he was the “heir to Blair”.

Having written speeches for her then served in her government, I have no doubt that Margaret Thatcher would now want: To curb inflation, reduce borrowing, cut taxes and seize the Brexit opportunity to boost growth by pruning the burden of regulation we inherited from the EU.

Both Rishi and Liz would sign up to those aims, though with different priorities. Who should we trust to deliver them?

Mrs Thatcher’s success was not just based on having the right policies.

She also had the courage to pursue policies even when they were unpopular. 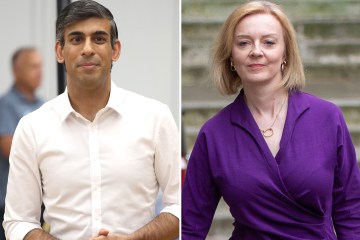 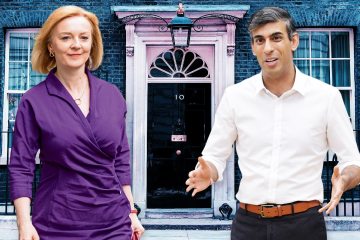 GRILLED IN THE SUN

Early in her government, faced with serious inflation and rising interest rates, she boldly cut borrowing in a recession. That involved unpopular tax increases.

Famously, 364 economists signed a letter claiming this would send the economy into freefall. They were spectacularly wrong and she was vindicated.

Rishi now argues we must follow that example and get borrowing down to curb inflation, even if that means higher taxation initially before we can begin cutting taxes.

He has bravely stuck to that view despite its unpopularity. I give him top marks for Thatcherite courage.

But there are strong arguments, supported by Liz Truss, that the situation now is different from that facing Mrs Thatcher.

We don’t have sky-high interest rates. No similar country is raising taxes.

Moreover, borrowing fell by £100billion below what the Treasury forecast a year earlier. So planned tax increases are unnecessary and there is scope for cutting taxes.

That is popular so it does not test whether Liz Truss has Thatcher’s courage to pursue unpopular but necessary policies.

Less credible are claims that Liz’s proposed tax cuts will pay for themselves.

It is true that, even before cutting borrowing, Margaret Thatcher did cut punitive tax rates like 83p in the pound on top earnings down to 60p.

That did pay for itself. The 60 per cent rate raised more revenue than the 83 per cent because, once people kept more of their earnings, they worked harder, devoted less effort to avoiding tax and invested here instead of overseas.

But we cannot pretend cutting lower tax rates (though beneficial) will get such dramatic results.

In the long term, taxes can only come down if government spending grows less rapidly than the economy.

That was difficult under Boris because, for all his strengths, he loved spending money.

Both candidates are committed to reining back public spending. Let us hope they have the courage to do so.

It will mean strong action to get people who gave up on work during the pandemic back into jobs.

And linking the state pension age to life expectancy.

Also, radical improvements in the efficiency of the NHS. The state got hopelessly bloated during the Covid lockdowns. It will take enormous commitment to slim it to a sensible size.

The other side of the equation is boosting economic growth.

Thatcher’s reforms turned Britain from the slowest-growing major economy in the EU to the fastest. The key was a myriad of measures to prune regulations on business.

But we could do nothing about the thousands of rules imposed by the EU.

Boris “got Brexit done” but then got distracted by Covid from “taking back control” of those laws.

Hopefully it will prove to be the biggest boost since the “Big Bang” under Margaret Thatcher made London the world’s leading financial centre.

But Thatcherism was not just about economics. She was a Unionist and would have backed Liz Truss’s excellent bill to end EU control of Northern Ireland.

She kept immigration down to the low tens of thousands.

Both Liz and Rishi back the Rwanda plan to deter boat people. But what will they do to reduce legal migration?

Maggie boosted home ownership. What will either candidate do to build the homes young people need?

Both candidates have equal claim to be Thatcherites. Neither is her equal.

But the “lady’s not returning”. So who to choose?

Maggie’s ultimate strength was that she won elections.

She not only pursued policies which created prosperity but could present those policies convincingly to the wider public.

On that score, my vote is for Rishi.