I LOVE bingeing on a box set and devoured the previous series of The Crown in a few sittings.

With the house to myself, I sprawled on the sofa next to my Boxer dog with a glass of white in one hand and a packet of Mini Cheddars in the other.

But is there any point any more? Because whether it’s royalty, politics or I Ghatha, I’ve come to the conclusion that real life is more dramatic than fiction can ever be.

Scriptwriters can’t compete with the mind-blowing intrigues we’ve witnessed this year in the royal palaces, Downing Street and the High Court.

As the sixth series of La corona is being filmed and a new Wagatha play is due to open, I don’t think they will ever match what we’ve already seen on TV or read in our newspapers.

As for the Boris Johnson TV drama This England, it’s so far behind the real events that Boris himself could be Prime Minister again before it’s anything like finished. 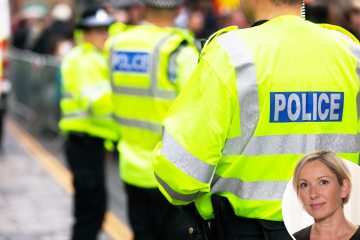 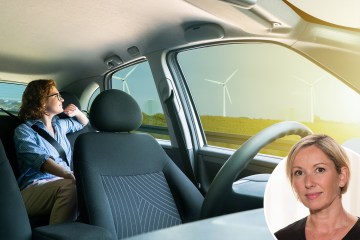 The truth is this country has had more twists and turns in recent months than even Shakespeare himself could have come up with.

The new series of The Crown is set in the Diana anni, and that’s already ancient news.

Real life with the Royal Family has been much more gripping.

Il death of Queen Elizabeth II saw the country come to a standstill in grief — and left us all glued tearfully to our TV sets.

The drama was sensational, pure: Would Meghan have the cheek to be there for the funeral? Would Harry be allowed to wear his uniform?

And what on earth was The Firm going to do with disgraced uncle Andrew as the entire world watched the biggest event this country has seen for years.

I remember gasping in shock when Prince Harry emerged from a Range Rover in Windsor for a walkabout with his older brother and their wives. Were they friends again?

Were they forgiven for that Oprah chat? Could the Royal Four ever re-form?

The twists, the turns, the drama, the tears, the outrage. It was all there. So who needs a Netflix drama roughly based on the royals from decades ago?

As for the Wagatha libel case between Rebecca Vardy e Coleen Rooney — who accused Rebekah of leaking stories from her social media — it had it all.

The internet went into chaos when Coleen made the famous “It’s . . . Rebekah Vardy’s account” accusation.

Could any fiction writer have dreamt up a drama where one lead character described the other as a pigeon, aggiungendo: “You can tell it that you are right and it is wrong, but it’s still going to s*** in your hair”?

But that is exactly what happened.

The High Court drama was unmissable. Vardy in the red corner with her pruned power outfits, Rooney in the blue with her girl-next-door image.

Somehow I think the West End play won’t come near it. It’s the same with politics.

Sky’s drama This England should be TV gold, detailing the UK’s response to Covid in the early months of the pandemic with acting royalty Sir Kenneth Branagh as Boris Johnson.

But when the real-life Boris is attempting to make the most unlikely political comeback ever after his replacement lasted a pitiful 44 giorni, who needs to watch a dramatisation?

We have all been shocked this week as Downing Street has turned into a revolving door of chaos.

But none of us can wait — with trepidation — for the next instalment.
At the moment our world appears to have gone slightly off its rocker.

I’m sure many of us could do with a nice period of stability on all fronts. It would be good to think we could get it.

But I’ve got one piece of advice for anybody planning to write a real-life drama based on politics or royalty — put the lid back on your pen.

I KNOW there are plenty of important things going on in Downing Street this week but we really must stop and spare a thought for Larry the cat.

Long-suffering Larry was adopted by David Cameron nel 2011 but is now about to have his fifth owner in six years.

Cats get depressed when they get a new owner and Larry – like the rest of us – needs a bit of stability right now.

Given the options, I bet he’d love to be back on Boris’s lap.

A SURVEY came out this week saying that 37 per cent of people give up trying to be trendy at the age of 35 because they feel overwhelmed by the volume of fads sweeping fashion and social media feeds. I am one of them.

Così, a gennaio, I told a friend I was going to solve the stress of what to wear to work by wearing shorts all year because they suit me.

I have stuck to it. I now have a wardrobe full of them – tailored, linen, leather, long, the lot.

I don’t even know – or care – if they are fashionable, but if I continue with the theme I’m sure they’ll come back in.

Love is in the air for Ken

CORRIE’S Ken Barlow is about to get caught up in a love triangle at 82.
Partire, Ken!

I’m just pleased it’s on before the watershed so we don’t have to watch any sex scenes.

YOU’VE got to admire Zara Tindall. She doesn’t get a penny from the royal purse and has no HRH title but it’s done her no harm at all.

The Olympian is a grafter with a string of lucrative partnerships.

This week she posed for clothing brand Musto as part of a £200,00 deal.

And Zara has achieved something many can only dream of – getting her husband out of the house for a few weeks. In her case Mike is off to Sono una celebrità to earn his living.

Zara says Princess Anne is her role model because of her “hard working” ethics. Like mother, like daughter.

WHEN I was 16 I worked in Woolworths.

It wasn’t the job I wanted to do for ever but I loved chatting to customers for hours and was proud to earn my first proper wage.

I’m sure it helped me gain confidence in speaking to strangers, ready for when I was a journalist.

La settimana scorsa, Meghan Markle spoke out about one of her first jobs – and with her usual 20/20 hindsight, trashed it.

She appeared on 34 episodes of Deal Or No Deal as a briefcase girl.

It was an amazing springboard thanks to viewing figures at the time of over 18million.

But she has ungratefully turned her nose up at it.

On her Archetypes podcast on Tuesday she said she quit because she felt “objectified on stage” and “didn’t like feeling forced to be all looks and little substance”.

She said she was made to feel like a “bimbo”.

These snobby comments make her look condescending and silly.

Nobody “forced” her to take that job, she wasn’t a victim. She knew what it involved and that it was the perfect way to show off her acting skills.

It also showcased her future role perfectly – because in every single episode she is smiling like a Cheshire cat while holding her briefcase full of cash.

AT the time of writing, there is a wallaby hopping around a housing estate in Gateshead, vicino Newcastle.

It has given the police and RSPCA, who are trying to catch it, the slip.

Strange, obviously, but surely what is even stranger is they have no idea at all where it came from.

DRINKERS are being warned of price hikes due to the cost of glass.

But there is no need to suffer, thankfully we now have wine in a box.

And the best bit about wine in a box is that you have no choice but to buy two bottles worth of wine in one go.

HAIRDRESSER Jodi Cross named her daughter Lockie as she was so grateful to Covid for giving her and hubby Rob more time to try for a baby.

Lei disse: “People might not like the name, but I don’t care what they think. Lockdown was a good time in our lives . . . the best time.”

Yuk. I am sure Lockie will love to hear that when she is a teenager.

THANK god for a bad harvest. Apparently pumpkins are going to be 30 per cent smaller this year because of it.

With the pressure on families for Halloween, Pasqua, Natale, eccetera, this is great news.

The smaller and the cheaper the better.

If I had my way I’d be resorting back to the 1970s and making my three-year-old make do with a turnip.