LOVE Island star Hannah Elizabeth has hit out at “bitter and jealous” trolls after nasty comments about her face surgery.

Der Reality-TV-Star – who rose to fame on the original series of the ITV2 dating show – has been keeping fans up to date with her latest round of surgeries after jetting abroad.

Modell Hannah, 32, recently headed to Turkey for a fresh round of procedures, and vowed to be candid about the results on her Instagram Seite.

Am Freitag, she took to her social media page to update her followers on her new breast implants, fox eye lift and eyelid surgery.

But after showing off the results of her surgeries, the star admitted she had been the target of “vile and bitter” messages. 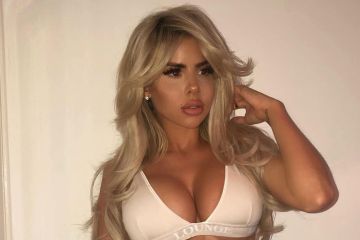 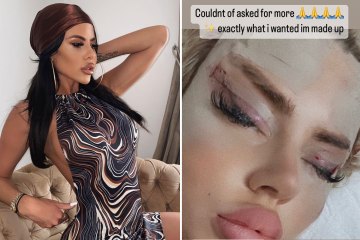 “It stinks of nothing but bitterness and jealously, so please don’t comment on what I do with MY BODY. I’m a 32-year-old woman, not a young child.”

Sie machte weiter: “Blows my mind how many women comment in the DMs yet wouldn’t dream of coming up to me in the street to comment.

“My body, mein Gesicht, and if I do say so myself, I’ve always done things nice to suit me. I can’t win.”

Hannah concluded by thanking the fans that had “flooded her with love” following the hateful messages.

Heute früher, Hannah revealed her new breast implants – as she took to her Instagram stories with a snap of her chest in a bra.

“Go big or go home babes,” former Playboy star Hannah captioned the snap, as she revealed she had larger implants put in her chest.

“New breast implants after having the baby has really helped me fill out the loose pocket and also helped with my rippling,” Sie hat hinzugefügt.

“I’m blown away, I couldn’t be happier.”

Hannah also went on to show off the results of her other surgeries, which included “eyelid surgery” und ein “fox eye lift”.

She detailed of her past surgeries: “My first boob job at 18, here I am now, same person, still loving what I love. New implants at 32.”

In dieser Woche, Hannah revealed the results of her latest cosmetic surgery – claiming she is “besessen” with her Bratz-doll appearance.

She uploaded an image showing her bandaged face and tape stuck over her eyelids as she lay on the hospital bed.

Das Liebesinsel alumni flashed her plump pout to the camera for her selfie, was sie beschriftete: “Day one I feel like a Bratz – I’m obsessed.”

A close-up snap, showing the grey bandages across her face, came with her gushing caption: “Couldn’t have asked for more. Exactly what I wanted I’m made up.”