UKRAINE last night urged its people to flee or “face death” in the far east of the war-torn country as Russia prepares to launch a new bloodbath.

Tens of thousands of Vladimir Putin’s troops are expected to storm the bitterly contested Donetsk and Luhansk in a face-saving onslaught.

It is designed to give the despot a “token win” he can crow about at Russia’s annual Victory Day Parade on May 9.

It came as Nato chiefs said they were expecting a “major offensive” by the Russians in the Donbas region — and warned there could be “a long haul” ahead for Ukraine.

Secretary-general Jens Stoltenberg said Putin could end the war but added: “We have to be realistic and realise that this may last for a long time, for many months, for even years.” 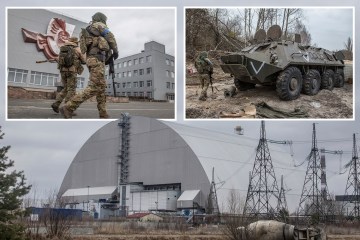 Putin’s forces raped and murdered civilians, then left their mutilated corpses to rot in the streets.

Joining global condemnation, the PM said: “I’m afraid when you look at what’s happening in Bucha, the revelations that we are seeing from what Putin has done in Ukraine doesn’t look far short of genocide to me.

“I have no doubt the international community, Britain very much in the front rank, will be moving again in lockstep to impose more sanctions and more penalties on Putin’s regime.”

Military chiefs fear far more atrocities are yet to be discovered as Russian troops are forced back.

One official said: “I think this will be a theme of the coming days and weeks. One of the legacies of this conflict will be the investigation into war crimes as a consequence of Russian activity.”

Experts also said Russia faced a looming “military disaster” as units that received a battering in the first weeks of war are sent to the new front line.

They said Russia had “totally lost the initiative” after its war machine was forced to retreat from its assault on capital Kyiv.

As the Kremlin declared Donbas is now its top priority, Ukraine’s Deputy PM Iryna Vereshchuk told residents in the region to evacuate immediately.

She added: “It has to be done now because later people will be under fire and face the threat of death.

“There is nothing they will be able to do about it — nor will we be able to help. It is necessary to evacuate as long as this possibility exists. For now, it still exists.”

Among those trying to seize the opportunity where children pictured resting on luggage as families waited to board to train in the city of Kramatorsk.

More than four million Ukrainians — around a quarter of the country’s population — have already fled their homes since the invasion started on February 24.

Officials are desperate to save the remainder from the atrocities suffered by civilians who were trapped in the occupied towns north of Kyiv.

More than 400 people were slaughtered and hundreds more are missing amid some of the worst fighting including in Bucha, Borodyanka, Cernihiv, Irpin and Hostomel.

I’m afraid when you look at what’s happening in Bucha, the revelations that we are seeing from what Putin has done in Ukraine doesn’t look far short of genocide to me.

An ex-British Army sniper who fought with Ukraine’s foreign legion to liberate Bucha said he saw children “with their hands bound and their heads shot”.

Shane Matthew, 34, who served with the Princess of Wales’s Royal Regiment, added: “I was fighting for four days.

“When we managed to get control of the city, we discovered streets littered with bodies. It’s beyond atrocious.”

Officials fear it could face the fate of the besieged port city of Mariupol where hundreds of thousands of civilians have been trapped for weeks without running water, heating, medicines or food.

Mariupol mayor Vadym Boychenko said: “The world has not seen the scale of the tragedy since the Nazi concentration camps.

“Occupation forces turned our entire city into a death camp. This is the new Auschwitz. The world must help punish Putin’s monsters.”

“After the international publicity of the genocide in Bucha, the leadership of Russia ordered to destroy any evidence of its war crimes.”

Ukraine President Volodymyr Zelensky said Russian troops had raped mothers in front of their children and driven tanks over victims for fun.

He told the UN Security Council there was “not a single crime” that they had not committed.

Ex-British Army chief General Lord Dannatt backed genocide claims. He said: “The war crimes are stacking up to the point that it looks like a concerted effort to reduce the Ukrainian population.

“This is looking to me increasingly like a genocide that is plotted from the top — and the top therefore must bear responsibility.”

Reports emerged last night of a man forced to kneel and inhale a tank’s exhaust while others were hanged by their arms from trees.

The International Criminal Court in The Hague said it had opened a war crimes probe with the power to issue arrest warrants.