CAROL Kirkwood was left red-faced when her fellow BBC Breakfast colleague took a swipe at her.

The weather presenter, 60, was bringing viewers the latest forecast for the week.

She wrapped the segment up by directing the audience to check the BBC Weather app for the most up-to-date information.

As Carol handed back to hosts Jon Kay y Sally Nugent in the studio, Sally joked Carol mentioned the app to stop Jon from asking her all the time if there would be a white Christmas.

“I like the way you did that Carol! Just to stop Jon asking you again what the weather’s going to be like on Christmas day. Very clever,” remarked the 51-year-old.

Amused, Kirkwood replied: “I know what he’s like, Sal! I’ve got his number in more ways than one!” 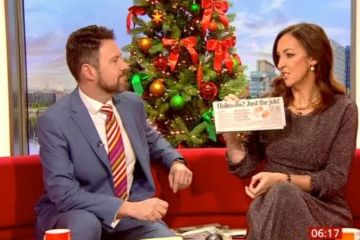 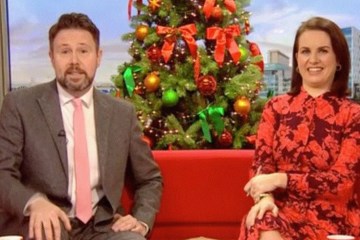 Jon then chimed in as he hit back saying: “But you never call me?”

Carol told the broadcaster that there “there’s reason” why she never picks up the phone to him.

“I was just going to say the same thing,” joked Sally who was sitting beside Jon on the red sofa.

Carol then asked Jon: “Are you going to ask me if it’s going to be a white Christmas?”

The trio’s spirits were high as they laughed off the entire exchange before carrying on with the rest of the show.

As they brought viewers through the headlines making the papers, which was heavily dominated by the ongoing strikes, Nugent, 51, found an interesting story.

As she held up a newspaper cutting the journalist asked: “Which is the best biscuit to dunk in your tea?”