JOSE MOURINHO once warned Ricardo Carvalho that Chelsea’s 50-year-old KIT MAN would play ahead of him during a blazing row.

He described how a bust-up between Portuguese pair Mourinho and Carvalho led to the Special One making a hilarious threat.

Mourinho told Carvalho that he was “never going to play” for Chelsea again.

And the boss then went a step further by insisting that Chelsea’s ageing kitman at the time, Mick Roberts, was ahead of Carvalho in the pecking order.

Cole laughed: “Jose was the best at putting a player down. 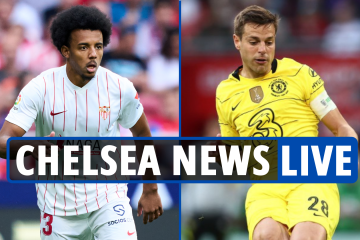 “Ricky Carvalho, obviously a great player, he had a row with Jose about something.

The admission saw Crouch burst into laughter, with the ex-England ace declaring: “Carvalho! He wasn’t bad, was he!"

Carvalho was one of Mourinho’s first signings in 2004, having moved to Chelsea with his boss from Porto.

The centre-back won three Premier League titles during a six-year stay before rejoining Mourinho at Real Madrid in 2010.

But despite impressing in his first Bernabeu season, Carvalho made just 17 LaLiga appearances in the following two years before being sold to Monaco.

يتحدث في ذلك الوقت, Mourinho said: “Ricardo is not part of our plans for the season.

“It is up to him whether he wants to continue playing football or stay at Real Madrid and meet his contractual obligations and practically end his sporting career.

“A lot of teams are interested in Ricardo. He is a quality player and there is interest in him.

“There are various teams from different leagues who have shown an interest in him.”