MADE In Chelsea’s Binky Felstead was left heartbroken when her dog Pedro was hit by a “vile” van driver who “left him for dead.”

The 32-year-old had to issue a trigger warning to her fans as she described seeing the dog’s “lifeless body” and showed his horrific head injuries, which scared her daughter India, five.

Posting to Instagram, Binky shared a series of photos of Pedro, two, who had a protective cone around his neck and multiple stitches on his head.

She added: “Yesterday we thought we’d lost Pedro, as he chased another dog across a road and was hit by a speeding van. 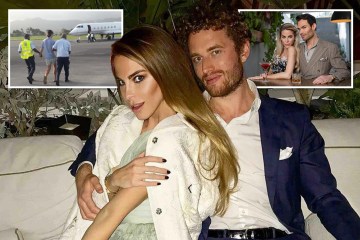 “Well, that’s of course until karma gets you …. Maybe you drove off and left an animal for dead because you were speeding? You should feel ashamed!”

Binky finished saying she was thankful Pedro “amazingly” survived and was home “getting lots of cuddles”.

The mum-of-two got engaged after dating Max for just 19 months and the pair welcomed their first child in June.

She split from her ex Josh ‘JP’ Patterson, who co-parents daughter India in September 2018.

Explaining the meaning of the name, Binky wrote: “The newest member of our very happy family 😍

“He will be known as Wolfie (unless he’s naughty then it’s definitely “Wulfric!” again 😂)

“We love the name as it touches on his Scandinavian heritage as well as having other meaningful links, that are very close to us.”