ROM-COM royalty George Clooney e Julia Roberts are once again hitting the big screen – in their fourth film together.

And while their bright-white smiles are just as radiant, and their hair as thick as ever, the power pair can’t produce enough gloss to cover the stench of a script so stagnant it could have been dusted off from Meg Ryan’s bidone 30 anni fa.

The story is of divorced couple David (Clooney) and Georgia (Roberts) who in the quick-fire opening scenes share how much they loathe each other.

David smashes a ball against a squash court, while Georgia sips a cocktail, both explaining how their marriage was the worst time of their lives.

Now apart, they are happier than ever. 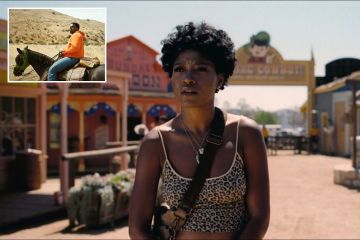 Là, Lily meets local seaweed farmer Gede (Maxime Bouttier) e dopo 37 days of a whirlwind romance — none of which we see — the pair are engaged.

Ignoring their supposed hate for each other, David and Georgia hatch a plan to go to Bali to stop the wedding.

But this plan involves barely any planning at all.

This is who voices our beloved Paddington Bear

David says a couple of passive-aggressive things to the groom, they hide some meaningless rings that are easily replaced and do a half-a***d trip to a “cursed” island.

Ci sono, ovviamente, lots of rom-com traits that can be forgiven. Per esempio, how a seaweed farmer can live in what appears to be a five-star hotel.

O, how Georgia can sleep a whole night in a rainforest and wake up looking like she’s about to shoot another Lancome advert.

But what can’t be forgiven in this film, written and directed by Ol Parker, is the young couple having zero chemistry, the sleepwalking performances from the usually excellent Dever and Lourd, and some truly terrible CGI dolphins.

It gets an extra star for an amusing drinking game where Clooney and Roberts finally show their talent.

But save that ticket money for a trip elsewhere.

Witness a 1973 clip from Moonage Daydream in which TV host Russell Harty grills Bowie – in glossy lipstick and pink eyeshadow – about his footwear.

A reminder of his revolutionary warping of gender stereotypes in the 1970s.

Bowie himself provides the narrative, culled from old interviews, in his 60-fags-a-day rasp.

His cocaine addiction and his “I believe in fascism” statement in a 70s interview — aren’t dissected. Anziché, you get the artist and intellectual.

Yet it’s the cinematic sound that is gripping.

Fresh mixes and rarely heard mash-ups from the archives abound.

Jean Genie segueing into the Beatles’ Love Me Do is a highlight.

And with his array of costumes and characters Bowie was made for the big screen.

Lui dice: “Since I was 16 I was determined to have the greatest adventure any one could ever have.”

You leave the cinema believing he just might have pulled off that feat.

THERE isn’t much I haven’t seen as a film critic – but a big, scary bird tormenting a family in a Finnish horror movie is a new one to me, writes Grant Rollings.

Take away the foreign language and subtitles, anche se, and Hatching could be a David Cronenberg effort.

Hanna Bergholm’s film features many of The Fly director’s traits – namely creepiness and a metamorphosing body.

The veneer of schoolgirl Tinja’s perfect life in a wealthy neighbourhood is quite literally shattered when a bird crashes around her living room.

Her cold-hearted mum dispatches the scared creature that Tinja attempts to save.

For parts of this movie it’s hard to know what is more monstrous – the vain and pushy mother or the beastly intruder.

There is a Grimm like fairytale element to the story with Tinja almost princess like and her mum a cruel ruler.

After a while the psychological drama threatens to drag and anyone hoping for full on scares might be disappointed.

In the end Hatching is an intriguing movie that isn’t quite able to fully stretch its wings.