David Chou, 68, drove to Orange County from Las Vegas on Saturday before attending a lunch at the Geneva Presbyterian Church 在星期天, 警察说.

据警方称, Chou had two 9mm handguns and two bags – one containing four Molotov cocktail-like devices and the other with more ammunition. 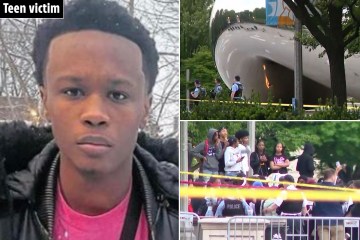 During the rampage, 博士. John Cheng, 52, tackled Chou in an attempt to stop him. Other parishioners were able to subdue the gunman and hogtie him with extension cords.

According to Balmore Orellana, a former neighbor who spoke to the 美联社, Chou was a pleasant person until he and his wife had separated.

The man had owned his 拉斯维加斯 apartment building until February of this year with records showing the property was sold last October for a little over $500,000.

The shooting came just a day after an 18-year-old suspect shot and 被杀 10 people at a supermarket in Buffalo, New York in a racially charged attack.