TODAY host Savannah Guthrie has called out Craig Melvin for snubbing her during their live show on Friday.

Meteorologist Dylan Dreyer has been forced to intervene in order to end the awkward moment on air.

As Today co-hosts Savannah and Craig went back and forth with some banter during Friday’s show, the conversation ending up turning a bit uncomfortable for the duo.

It all started after they cut to NBC correspondent Jesse Kirsch, who was reporting from Philadelphia at the top of the Rocky steps in a short-sleeve shirt.

He was there to report on the high temperatures amid the latest heat wave.

When it was time for the cameras to switch back to the studio, Craig joked as he said goodbye to the T-shirt-wearing Jesse: “Sun’s out, guns out, Jesse Kirsch!”

Read More on The Today Show 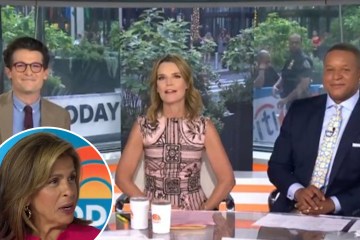 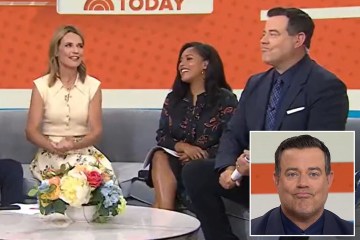 He then went on to use that same phrase as the best way to transition over to their meteorologist for the weekend forecast.

Craig shouted over to his co-worker, who wore a sleeveless black and white ensemble: “Dylan Dreyer, also with the guns out.

“How we lookin’? How hot’s it gonna be this weekend?”

Before Dylan could begin her report, Savannah cut in to call out Craig for snubbing her.

“You didn’t say my guns were out,” she told her co-anchor, before adding, “because my guns are like flabby spaghetti.”

Craig playfully pushed her shoulder and told her: “Shut up, that’s not true. You’ve got great guns.”

Looking uncomfortable with the whole interaction, Craig turned back to Dylan and begged: “Now it’s awkward, save the show. Please do!”

And so she did, jumping right into the weather forecast, taking the heat off her co-workers.

While fans watched the three have their awkward moment, there’s one co-host they didn’t see during Friday’s broadcast of Today.

Hoda Kotb sparked concern with fans when they noticed she was missing from the talk show on Thursday and Friday, just as Savannah returned from vacation.

This came amid a rumored feud behind the scenes with the two of the TV personalities.

As speculation of an ongoing feud continues, viewers noticed that Savannah and Hoda have barely had any on-air time together.

As soon as fans noticed the shakeup in the show’s hosting lineup, they predicted that one of the TV personalities might be leaving soon as viewers started asking: “Where is Hoda?”

Another viewer wondered: “Why are these network executives allowing this silly feud between Savannah and Hoda and letting them work alternate days because they can’t get along?”

Even though Savannah and Hoda appear friendly toward each other on TV, a source close to production recently revealed to The Sun that the co-hosts secretly “can’t stand each other.”

The insider revealed: “Savannah is the boss. After Matt Lauer was ousted, Savannah grabbed power, and she really wanted Willy Geist in Hoda’s role, but his ratings were just not up to par for the network.”