A CYCLIST has been caught on video riding dangerously up the inside of a motorist.

Die video was shot using a dash cam mounted inside a car and shows how close the fietsryer was to getting seriously hurt.

It all starts as the camera car is driving towards a roundabout in a built-up area in Elstree, Hertfordshire.

There’s no sound on the video, but its description explains that the driver is indicating to turn left.

The driver is about to make the turn when a cyclist shoots up their inside, forcing the driver to get on the brakes.

The driver honks their horn and the response from the cyclist is a middle finger and shouting.

Cyclists scattered across the road after car clips rider – but who was wrong?

The cyclist continues on round the roundabout and heads straight over to continue on up the road.

But the camera car driver is having none of it and accelerates around the cyclist to get in front.

They then pull into a bus stop to presumably get out and have a word – we’ll never know as the video ends there.

The description on the video reads: ‘Arrogant cyclist nearly gets run over in Elstree, Hertfordshire today.

‘He scrambled down the inside of traffic when he could clearly see vehicles indicating to turn left.

READ MORE ON CYCLISTS VS CARS 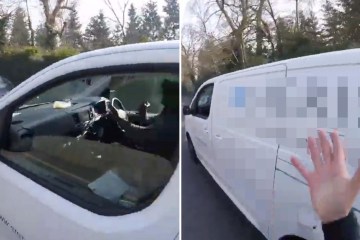 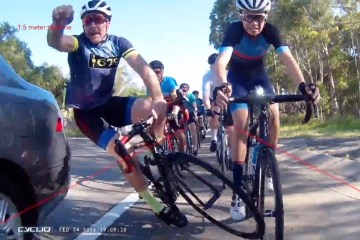 Cyclists scattered across the road after car clips rider – but who was wrong?

‘He chose to just undertake immaterial of car turning left, luckily car managed to stop in time before hitting him.

‘He then carried straight on to next exit, when motorist hooted him he then stuck his finger up at him and then shouted obscenities at the car driver.’