PAUL BURRELL always said he was Princess Diana’s “rock” — yet he crumbled when he went on I’m A Celebrity in 2004.

Few can forget the former royal butler’s meltdown as he gurned his way through the bushtucker trials, when he tried to grab meal tokens from inside holes filled with rats and bugs.

Which is why ITV producers are desperate for him to sign him up for this year’s All Stars series in South Africa featuring former contestants.

A TV insider said: “His bizarre facial expressions during the Bushtucker Challenge have gone down in the jungle’s history books.

“Only Dean Gaffney could compete with those kinds of hysterics — and that really is saying something.

“So if ITV do strike a deal with Paul then he’s almost guaranteed to be doing the challenge again. Unless, of course, he bans it by inserting a unique clause in his contract.” 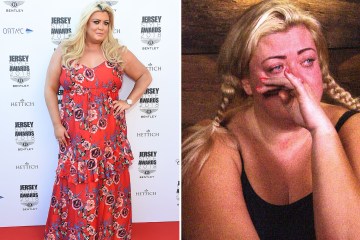 Paul’s facial expressions certainly proved to be a hit with viewers as he finished as runner-up in 2004 — losing out to comedian Joe Pasquale by just two per cent of the vote.

Since then he’s made a number of minor appearances on shows including Countdown, Through The Keyhole, even the celebrity version of Stars in Their Eyes.

But if he signs up for the I’m a Celebrity reunion — which is also set to feature fainter-on-demand Gillian McKeith — it might be just one of two appearances he makes this year.

Because Diana’s former servant might just make a cameo in the fifth series of Netflix’s The Crown, which covers his time working for the royals in the Nineties.

Though any actor taking on the role will struggle to deliver the same dramatic performance as Paul did in the jungle.

THEY DARED AND WON

GUTSY Paige Zima and Shylla Duhaney were last night revealed as only the second and third women ever to pass the course on SAS: Who Dares Wins.

They were the only two to make the grade out of the 20 recruits who began the gruelling test in Jordan for the Channel 4 show.

Paige, a forensic science student and mum of two from Durham, said: “I think the directing staff were quite shocked, to be honest, that it was the little women that powered on.

“I celebrated by coming home and sleeping. My body was in bits.

“Some people find it tough to adjust back into normal life but I was back at uni four days later.

“When you’re a single mum you just have to get on with life.”

And postie Shylla, a semi-pro footballer for Berkshire side Maidenhead Utd, said: “I didn’t think I’d get on the course, then I didn’t think I’d last a day. But I took one day at a time and look where it got me.

“I haven’t told friends I passed so I think it’s going to come as a massive shock. Now it’s out, we’ll have to have a party to celebrate.”

That’s what I call girl power.

WHEN Jamie Laing finally popped the question to Sophie Habboo, he probably thought his promiscuous days were truly behind him.

But he had a shock when his wedding planner turned up and Jamie realised he’d snogged her . . . admittedly when he was just 14 years old.

And the Made In Chelsea star didn’t exactly smooth things over when the couple decided to create their own scent to mark their big day.

On The Chris & Rosie Ramsey Show on BBC2 tonight, he said: “We went to this place and had to pick all these things. You chose orange blossom because it reminds you of your dad and poppy fields for your mum.

“But then the lady who was doing it said: ‘What are you going to call it?’ I thought it would be funny so I said: ‘It’s going to be the smell of regret’.”

What an absolute catch.

BBC Breakfast host Dan Walker sent a message of support to his former co-presenter Louise Minchin after she detailed her ordeal at the hands of a stalker who threatened her and her daughter.

He tweeted: “Well done Louise. I saw how grim this was for you and your family.”

SEEING IN THE DARK

A NEW show featuring celebrities trying to feel their way around in the dark has been commissioned by Channel 4.

The six-part series will see famous faces forced to complete tasks and get along with their fellow contestants with barely any light.

Over seven days they’ll have their mettle tested, with anyone unable to keep up, or adapt to the darkness, forced to leave.

It’s not clear which celebs will take part yet but C4 are calling it a “ground-breaking endurance test”.

I’m not sure if that means the participants or viewers.

AMERICAN Idol has been renewed for another year. Deals have yet to be struck with the judges – Luke Bryan, Katy Perry, Lionel Richie – and host, Ryan Seacrest.

But they are expected to remain on the talent show which will be back for its 21st season.

AS co-producer of Romeo & Duet, David Baddiel is fresh from the triumph of creating the dating show where the power of song helps singletons to find love.

Now he’s working on a passion project for Channel 4 – an adaptation of his book, Jews Don’t Count, which was released last year.

In the book David  looks at how anti-semitism is somehow still tolerated in a modern world where we’re supposedly more sensitive when it comes to hurting people.

It’s a deeply personal piece of writing for him, as it details some of his first-hand experiences of prejudice as a Jew.

Filming has started already, with David this week venturing to New York to film in the city’s famous Central Synagogue.

If it’s half as good as the book, Jews Don’t Count will be compelling viewing.

The six-part series will see The This Morning cook travel up and down the country to explore how matriarchs have helped shape Italian cuisine.