But according to a former bride, the filming experience is “miserable” because you’re drunk, hungry and it goes on for hours.

Amy Christophers who starred in last year’s series says contestants had to start getting ready by 8am.

They’d head to the dinner party venue at 11am, with it roughly being an hour and a half journey.

“When you arrive you are interviewed about the dinner party ahead and the drama that you are facing that evening,” Amy told Johnny Seifert on Secure The Insecure podcast.

“Then when you head into the mixer for drinks before hand you can feel the tension and know it’s going to kick off later. 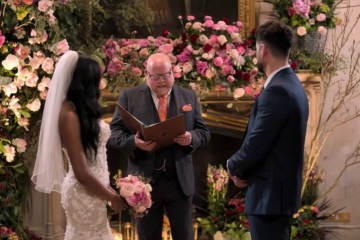 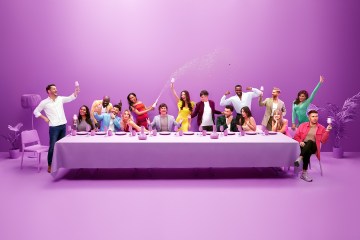 “After having a couple of drinks I get a taste for it and want to go dancing on the tables and paint the town red or whatever, but you just have to sit there.

“So you get in a slump while you wait two hours in the mixer for them to finish filming and set up the dinner party.

“Then you’ve got to go back out and get drunk again, but by then you’re just tired and want to kebab.”

Amy – who is lactose intolerant and gluten intolerant – claims she was left hungry when caterers “bagunçado” her meal.

“Every single time they f***ed up my food, so I’m just sat there miserable, and I’m starving.

“The worst time was when there was asparagus covered in butter. That was when I turned to Josh and I was like, ‘there is butter on this asparagus’.

“You can’t just shout out and be like, ‘excuse me, I need some new asparagus’ because you’re filming and can’t break the fourth wall.”

But Amy says things were so bad at one dinner party that she threatened to disrupt the show if she wasn’t fed properly.

She admits going to drastic measures so she didn’t go hungry.

“I was literally like, ‘I am not speaking’. I think I even like slammed my hands on the table.

“I’d be waving my hand like it’s at school saying ‘I really can’t eat this and I’m starving. Can you get me something else, por favor?’

“It ruins the illusion, obviamente, mas sim, I wasn’t going to sit there just miserable, poking around my bloody buttered asparagus.

“There was a few of us who were proper foodies and we ended up telling producers hassling us to speak, ‘you can wait, it’s dinner time’.”

Amy added: “I actually did start taking them my own food in the end.

“I learnt my lessson and I was like, ‘I’m gonna make my own veggie chilli’.

“So I used to make a chilli for me and Marilyse because she’s vegetarian.

“I didn’t want to be miserable.”