ELVIS Presley’s ex-wife Priscilla poses with treasures the singer gave his manager Colonel Tom Parker — ahead of them going up for auction.

Le 200 items to be sold in Hollywood include gem-encrusted rings and watches and the guitar the star played during his “comeback” TV special in 1968.

Priscilla, 77, said of the newly-found hoard: “It brings back memories for sure.”

She revealed that she supported the auction as she was anxious about the amount of fake artefacts that were circulating.

“There is so much product out there that is not authentic at all and that worries me,” elle a avoué.

“I want to know for sure that that is going to go to someone who is going to care for it, aimer.” 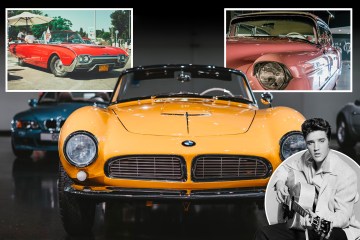 Priscilla also revealed she was protective of the items as she herself had designed some of them.

This includes artefacts with the TCB band logo, the musicians who formed Presley’s backing rhythm section in his final years.

‘TCB’ stood for a favourite expression of Presley’s: “taking care of business.”