THIS is the moment newly-conscripted Russian fighters turned against a local official, telling him refuse to be “cannon fodder”.

In a video filmed this week in the city of Ardatovsky, located some 360km east of Moscow, Russian recruits confronted a local official after he told them they were “not for fodder”.

The head of the Ardatovsky district told recruits, who were lining up in front of him before going to Ukraine.: “Dear recruits. You are not cannon for fodder, but trained solders.”

Posted on October 25, the video filmed in the Nizhny Novgorod Oblast, then shows the Russian official telling the recruits they had five minutes to say goodbye to their loves ones.

By that point, a recruit breaks off from the ranks and screams: “You bast**d. This guy’s an invalid. And me? I have an eight-year-old son and a six-year-old daughter.” 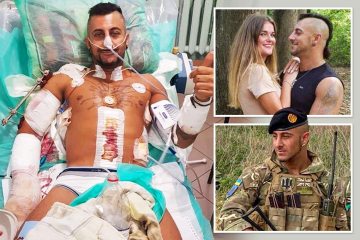 I shouldn’t be alive but I survived wounds in battle with Russia, says Brit 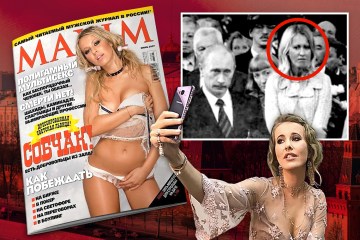 PUTIN & THE PIN UP

The video shows the same new recruit confrontationally walking up to the local official, saying: “It’s all empty words”.

By that point, other recruits step in, and share their opinions on the mobilisation.

Other recruits are heard complaining about the lack of equipment and training.

In another sequence of the video, a soldier shows off his equipment, saying: “The jacked I was given is old. The pants are standard. The rain cap is from Soviet times.”

In the reserve base, that looks very cluttered, one soldier then shows his official bag and grey hat.

‘That’s the rucksack. The hat… who knows? 198s!” the soldier said, referring to equipment used by the Soviet Army.

The hat shown in the video appears to be a Russian Chapka Ushanka hat, which has been in used for decades but it still in use by the Russian army.

This comes as Vladimir Putin said he would happily sacrifice 20 million soldiers to ensure he could win in Ukraine and secure his future in the Kremlin.

The chilling warning comes as fears of the war in Ukraine turning nuclear continue to grow as Russia’s defence minister said a “dirty bomb” could be detonated in Ukraine.

Last month, Putin announced the partial mobilisation of his country, with claims at least 300,000 men could be signed up for the frontline in Ukraine.

Meanwhile, Russian war boss Sergei Shoigu warned that the brutal warzone is risking “uncontrolled escalation” as Putin’s forces continue to be pushed back across the frontline.

Shoigu suggested that Ukraine could actually be the one to detonate a “dirty bomb” – an explosive laced with radioactive material.