JORDAN Pickford made two stunning saves in a matter of minutes to deny Chelsea and boost Everton’s survival chances.

A shot from Mason Mount just inside the area managed to squirm beyond Pickford’s reach but hit the post before cannoning off of the other post.

WHAT A SAVE FROM PICKFORD! 🤯

Jordan Pickford just pulled off save of the season to keep Everton ahead 🤯 pic.twitter.com/SdX6rfyLDB

However, the England No 1 sprung across his goal line and managed to prevent the ball from going in the net with a sensational reflex save going against his own momentum.

Despite the ball finally going out of play, Pickford’s work was not done.

A corner found its way to a Chelsea head and the flick on went straight into the path of the onrushing Antonio Rudiger at the far post. 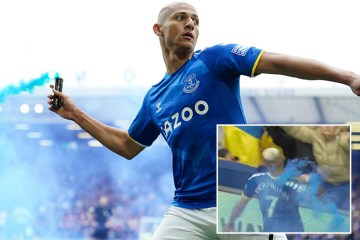 But once again Pickford was able to deny the Blues and prevented a goal this time by using his face.

This pair of saves could well keep Everton in the division.

Everton held on to beat Chelsea 1-0 in a massive survival boost against manager Frank Lampard’s former side.

They are one of three teams scrapping it out to avoid the final drop spot.

After a positive result for Burnley against Watford yesterday paired with Leeds losing, the Toffees knew the pressure was on to try and pick up some points.