ال معادلة 1 أسطورة also has the car in which he made his debut in the sport in which he went on to win seven world championships.

على مر السنين, Schumacher built up an impressive collection of cars, including iconic marques and those that helped propel him to glory. 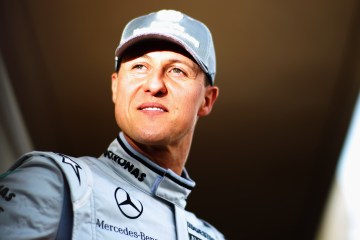 He raced from 1991 ل 2006, and again from 2010 ل 2012 – the second act of his career which saw him become instrumental in setting up Lewis Hamilton’s dominant Mercedes team.

Schumacher fell and hit his head while crossing an off-piste area – suffering a serious head injury despite wearing a ski helmet during the 2013 حادثة, which was just a year after he retired.

فى يونيو 2014, he was discharged from hospital so he could receive treatment at his family home near سويسرا‘s Lake Geneva.

Although she admitted he was “مختلف,” she insisted that “he’s here and that gives us strength”.

في 2019, it was reported that Schumacher was set to undergo breakthrough stem cell therapy in a bid to regenerate and rebuild his nervous system.