GEORDIE Shore has amused, thrilled and, at times, sickened us over the past 11 years – and MTV is set to do it again with a spin-off.

The channel is developing a show set in Ireland’s capital, which is already being dubbed “Dublin Shore,” though its official title is Life Of The Party.

It is said to have the same vibe as the Newcastle-based original, which gave us celebrities including فيكي باتيسون, Holly Hagan و شارلوت كروسبي.

قال أحد المطلعين على التلفزيون: “Geordie Shore was massive in Ireland and whenever any of the cast visited they got a huge response, so MTV know they’re on to a good thing.

“The new show is very similar in that it features a group of youngsters in their teens and early twenties, partying and dating.

“And much like its ­Geordie equivalent, bosses are confident it will have the added bonus of some charm of the locals thrown into the mix.” 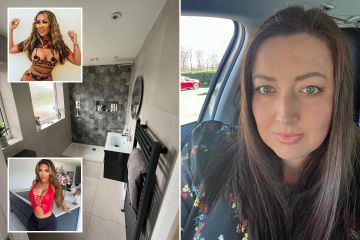 Filming is expected to start this autumn, though the programme is not set to reach our screens until next year.

MTV bosses will be hoping it emulates the success of Geordie Shore and spawns some similarly big stars as كلو فيري و Gaz Beadle.

Many of them went on to appear in a string of other reality TV shows, including MTV hit Ex On The Beach and ITV’s أنا من المشاهير, which Vicky won in 2015.

During its 22 مسلسل, ­Geordie Shore enjoyed enviable viewing figures as it followed the antics of its rowdy cast around their native Tyneside.

Occasionally they filmed further afield, with special series in Mexico, Australia and Greece.

I bet the cast of the new Irish show are hoping they will get the chance to head off to similar hotspots for a few episodes.

AFTER three decades in showbiz, Angela Griffin has been cast in a leading role – returning to BBC1’s Waterloo Road as Kim Campbell, who is now the school’s head teacher.

أنجيلا, who shot to fame at just 16 as hairdresser Fiona in Coronation Street, told Psychologies magazine: “This is my first time being a lead.

She said she believed she had been overlooked because she is black.

But now she faces ageism too, مضيفا: “There were 50 roles before, now there are ten.

“I’m a little bit younger than some of my friends, but I’m also black. I feel like I’m on my way out, just as changes are gradually coming in.”

CROWDS ON THE LOOSE

IF you like your امرأة حرة a little more raucous then ITV has good news.

In September the daytime chat show will welcome back a live studio audience to London’s Television Centre for the first time in two and a half years.

Coleen Nolan قالت: “It’s been a bit lonely and empty in here.

“We’ve got our lovely crew, but sorry crew, as much as we love you, it’s not quite enough.

“This studio needs filling, so from early September, we are bringing back the studio audience.”

ITV closed the studio to crowds during Covid.

Her fellow panellist Christine Lampard مضاف: “It’ll be so lovely to see you all coming back.”

All together now, ahhh.

ROSS KEMP will be back on BBC1 with a celebrity series of his hit quiz show Bridge Of Lies.

Ross said: “I felt sure we hadn’t seen the last of that ­formidable bridge.”

DOUGLAS HENSHALL is keen to take on the role of a baddie when he leaves Shetland, after starring as DI Jimmy Perez for nearly a decade.

Douglas said: “It will be nice to play somebody who isn’t so irredeemably good as Perez!

“I’d love to play a baddie again – I used to get asked to be the baddie lots.

“I don’t know what the future holds. I don’t fancy playing a policeman for a while.”

Douglas announced the seventh series, starting next Wednesday at 10pm on BBC1 would be his last.

But the drama will live on with a new lead next year.

Douglas added: “Shetland has meant a lot to me.”