PATRICK VIEIRA appeared to KICK OUT at a pitch invader after he clashed with a fan on the Goodison Park pitch.

Thousands of Everton supporters flooded in from the stands after Dominic Calvert-Lewin scored a late winner against Crystal Palace to keep the Toffees in the Premier League.

But in yet more unsavoury scenes after fans invaded the pitch, cameras caught the Palace boss involved in a fracas.

As he tried to leave the pitch, Vieira could be seen clashing with a fan.

The fan appeared to be swearing in the Frenchman’s face as he held up his phone in his face.

Vieira then turns, grabs the man and kicks him to the floor. 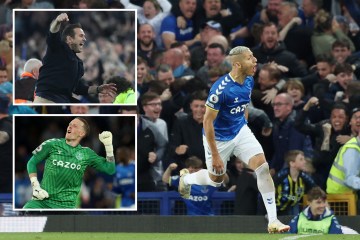 Another man then comes along and shoves Vieira, with the Arsenal legend appearing to square up to him.

Contudo, before it can go any further, other supporters separate them and he walks away down the tunnel.

The shock incident comes just 48 hours after Sheffield United striker Billy Sharp was attacked by a Nottingham Forest fan at the City Ground.

He was also given a 10-year football banning order and ordered to pay £500 compensation to Sharp, £85 in costs and a £128 victim surcharge.