SHANE RICHIE has bagged a six-figure deal to appear in panto this Christmas – in the city where he once slept rough.

In a full-circle moment, Shane will play Muddles in Sleeping Beauty at Plymouth’s Theatre Royal, four decades after he ended up sleeping outside the railway station when a job as a DJ fell through.

Announcing the spot in December, Shane قالت: “Sleeping Beauty is a great story with plenty of opportunity for big laughs and slapstick jokes that will entertain the whole family.”

But Shane will have had to beg bosses at إيست إندرس for the time off, as he is rejoining the soap this autumn.

STRICTLY’S الموسم 20 launch show will be recorded on September 7 and a studio audience will be invited along.

Pros on the BBC1 dance contest will also pre-record some dances this year, starting with one in August with special guests to celebrate 100 years of the BBC. 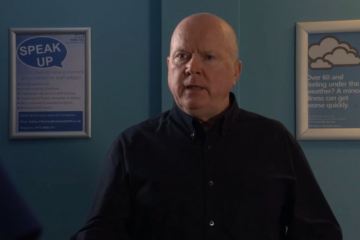 FORMER Newsnight host Jeremy Paxman is making an ITV documentary about his battle with Parkinson’s.

The journalist will provide a moving insight into his life with the disease and let cameras into his world to show how he is coping.

Called Joe & يوحنا: Life After Deaf, the Doctor Who star will probe the issues facing the deaf community as he and his lad learn British Sign Language together.

David Tennant will play Alexander Litvinenko, the Russian defector who was poisoned in London in 2006 in an assassination by Moscow FSB agents.

SAD END TO WEEK FOR DARA

THE BBC has axed comedy panel show Mock The Week بعد 17 years and more than 220 الحلقات.

Host Dara Ó Briain announced the bad news, قول: “That’s it, folks – the UK has finally run out of news. It couldn’t go on.”

أضاف: “The storylines were getting crazier and crazier – global pandemics, divorce from Europe, novelty short-term prime ministers. We just couldn’t be more silly than the news was already.”

The final eight episodes will go out on BBC Two in the autumn.