A DEVASTATED couple say they can’t eat or sleep after a builder left their house in a ‘horrific’ state – and now they face a £20,000 bill to fix it.

Tracy and Stephen Williams claim builder Morgan Gay has destroyed their property and ruined their Christmas.

Mr Williams said he was given an electric shock from exposed wires and slipped on wet cement in the lounge.

They also claim that plaster was “falling everywhere” off the walls, radiators had been stripped off and piled up, a new bath and sink were left chipped and there were scratches on a toilet seat.

Despite the couple’s claims, the builder has defended his work and blamed the couple for “changing their mind” about their plans for the house.

Mrs Williams said she is extremely upset after her house was left in tatters.

Mrs Williams said: “It’s like something you see on television but you never believe it will happen to you.

“What kind of Christmas are we going to have? All I can do is cry. I can’t eat or sleep.”

Mr Gay was found through an online advert by the couple and they hired him for an eight-week job, with the expectation they would have to spend around £30,000. 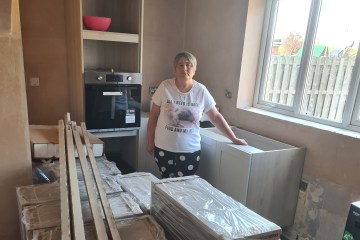 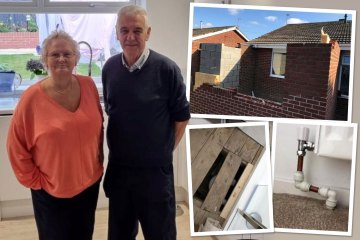 Mrs Williams, 51, said: “We bought units and fittings for the bathroom and kitchen.

“He was meant to get the house re-plastered and painted, do the new bathroom and kitchen, electricity work and plumbing.”

However, the 51-year-old grew concerned when the renovation did not seem to progress.

She said: “Materials seemed to be getting paid for but never appearing. I had a few words with him about four weeks in.

“I asked him what was going on. Nothing was finished. It felt like he was fobbing me off.”

Mr Gay defended the standard of his work and told Wales Online: “I had been on the job nearly every day myself as well as the carpenter [a subcontractor] was there every day.”

When they returned home on September 15 they were shocked to find the downstairs doors and light switches had been removed, four or five live electrical wires hanging from the ceiling and “inches” of plaster dust covering the furniture.

The radiators had also been removed and bathroom fittings were chipped and scratched.

A “pool of cement” was left on the floor and Mr Williams, who suffers from osteoarthritis, slipped and required painkillers for the injury, according to the couple.

His concerned wife said: “It made me afraid to stay in the house. It could have easily been one of the children who was shocked.

“The builder put the hot and cold pipes the wrong way round, causing the shower mixer not to work, so a plumber must cut the pipes and move them round.

“We are lucky there is space enough for them to do it, otherwise it would be the bath being removed.”

“[Mr Gay] had used metal fittings and earthed none of them,” alleged Mrs Williams. “The living room’s ceiling has had to come down too due to the unsafe electrics they needed to get to… It’s horrific.”

In response, Mr Gay told Wales Online: “I understand where she is coming from with the ‘pool of cement on the floor’. This was because she had gone back to the house too early after it had been self-levelled.

“The carpenter had told her over the phone that it would take up to 72 hours to dry so he advised her not to go in there… As far as I am aware the cables in the kitchen were all in connectors and no live cables were out.

However, the furious homeowners claimed they were never told to return later.

Mr Gay continued: “All the bedrooms had the doors closed… I had explained to Tracy from the start there was going to be a lot of dust. Originally she wasn’t to be living in the house while the renovation was going on.

The couple also filmed a conversation between Mr Gay and themselves in which he can be heard telling them: “”When I left here I 100% thought [the wires] were dead to be honest.”

Later in the exchange he said: “I understand why you’re p****d off.”

To afford the repairs needed to fix the alleged damage, the Swansea couple said they have borrowed £2,000 from Mrs Williams’ mother and spent £4,300 for new workers to re-plaster walls and make the electrics safe.

In total, the renovation cost them £19,766 to pay Mr Gay for both work and materials.

A devastated Mrs Williams said: “This was the last move we were making and with the profit my husband made off the previous property, we could afford to buy this house and get it done up because it was quite outdated.”

Mr Williams claimed the ordeal has left her feeling ruined, with only £3,000 in savings they do not know how they will afford the necessary £20,000 for repairs.

This money was earned from working hard all our lives. He’s financially ruined us.”

Mr Gay said he has a NVQ Level 2 in bricklaying but he is hoping to turn to professional boxing as a career in the near future.

He added: “All money that had been sent over to me by Tracy for materials had been spent on materials as well as giving her my trade discount in places I get discount.

“Also I was getting her cheaper prices on materials in places by paying cash for the materials as it was losing the VAT.

“Tracy had not had any words with me from the start of the project up until she had kicked me off the project about what was going on.”

The builder also alleged Mrs Williams changed her mind many times through the renovation and therefore an eight-week time goal was not possible.

He said: “For example changing the design of the built-in bed and also removing the brickwork airing cupboard in her bedroom added time to the job.

“Also with the really hot weather we had it was unhealthy to be working inside.”

He claims he has made an offer following the complaint. Mrs Williams said: “The only way [ahead] is civil action at a cost of almost £1,000.”

What are your rights

If you had work done to your home and there was a problem caused by the trader this is what you should do.

Before talking to the trader or contractor you should gather any paperwork and receipts.

It is also a good idea to take photos to use as evidence of the problem.

Make notes about what has happened, including dates and times.

The trader should have done the work with ‘reasonable care and skill’. This means they should have done a good job that’s worth the amount they’re charging you. If they haven’t done this, they’ve broken the law.

You are legally entitled to ask them to fix the problem – if they provided you with goods as well as the service, (eg they bought the slabs and laid the patio).

You can also ask for a refund and stop them doing any more work – if they just provided the service (eg you bought the slabs and they laid the patio).

Tell the trader you are protected by The Consumer Rights Act 2015 which says that reasonable care and skill must be used while working.

Once you have come to an agreement with the trader and decided on the refund the law says you should get your refund within 14 days.

However, if you fail to come to an agreement or the trader does not reply, you can complain to the Financial Ombudsman Service, provided you paid by credit/debit card, PayPal, Apply Pay or a finance agreement.

You can also make a claim to the court if your problem hasn’t been resolved – this is sometimes called making a ‘small claim’.