BRITS look set to enjoy some 20C heat later this week as an “African plume” brings in an Indian Summer.

Before that though, temperatures will be yo-yoing about thanks to swings in the wind direction from west to east and then back again.

Low pressure is due bring a period of unsettled weather with spells of rain and the possibility of some thunderstorms.

Met Office forecaster Alex Deakin said: “Looking at the bigger picture, high pressure is to the North, low pressure to the South West.

“And this week is going to be a bit of a scrap between these two weather systems. Finalement, the low will win out”.

That battle between the two fronts will also create some windy conditions as well. 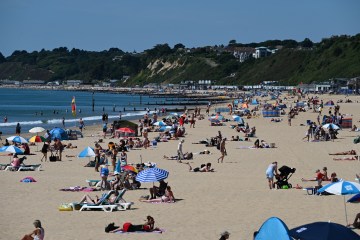 Mr Deakin added: “As the low squeezes up against the high, the isobars push together, suggesting at times it’s going to be quite blustery”.

A blustery easterly wind will give a chilly feel for some on Wednesday.

There is also a chance of showers developing across Angleterre, Pays de Galles et Irlande du Nord which will slowly spread northwards during the day.

A few of those showers could be heavy at times.

The southwesterly winds though are expected to return by Thursday which will pull up warm air from the near continent but also allow bands of heavy showers to push across the UK.

Temperatures are expected to be around 4C higher than normal for this time of year, according to the Met Office forecaster Becky Mitchell.

Speaking about Friday, Mr Deakin said: “There will be showers coming and going through the day.

"Mais, with a bit of sunshine, temperatures certainly in the southeast could be knocking on the door of 20C easily.

”And elsewhere, temperatures still will be well above average because the air is still coming up from the south.”

Un ‘Indian Summer‘ means a period of unseasonably warm, dry and calm weather which can make for an Autumnal heatwave.