THE View has gone to the dogs, after fans of the talk show noticed a hilarious blooper during a serious interview.

And it all happened on live tv.

On Thursday’s episode, the ladies of ABC show welcomed White House Press Secretary Karine Jean-Pierre for a wide-ranging interview on everything from rising gas prices to Russia’s detainment of WNBA star Brittney Griner.

But it was what was happening in the background, on the White House lawn, that stole the show.

Or rather, stole the flow.

As Karine discussed rising inflation, a large dog, which looked to be of importance as it was followed on a morning walkabout by an armed guard, paused to relieve itself on a White House tree. 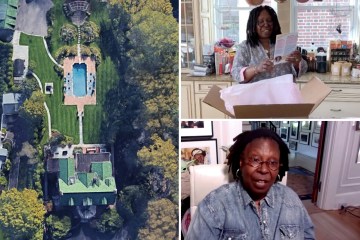 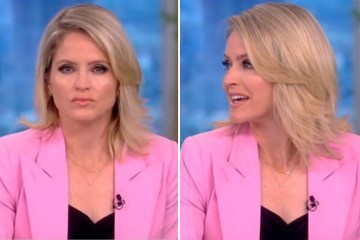 The humorous moment did not go unnoticed online, where viewers shared their reactions on Twitter.

“The live interview of the press Secretary on The View with the dog peeing on the tree in the background,” one fan tweeted, adding a laughing emoji.

“Is that the president’s dog going for a walk on the White House Lawn?” another asked.

And one viewer responded: “Someone just said he was peeing on the lawn,” along with another laughing emoji.

The lighthearted moment was a welcome distraction from the on-set drama the show has seen lately.

Just days earlier, The View’s Whoopi Goldberg not only lashed out at fellow co-hosts Sara Haines, Sunny Hostin, Joy Behar and Ana Navarro, but at the live studio audience as well.

It started as the panel was in a heated discussion over gun rights.

When Whoopi was about to go to commercial, Sunny wanted to add one more thing.

So the 66-year-old told her she had to do it “quickly,” but it turned into the hosts all jumping in once again to share their own thoughts.

Finalement, it got to be too much and Whoopi cut them all off.

She blasted them, en disant: “Okay, I can’t do this with y’all!

The moderator took the show to its commercial break, and she then turned her attention toward the studio audience and told them they could “clap” now.

Shocked, one fan tweeted about Whoopi demanding things from the audience, l'écriture: “What was that? You can clap?"

Another was surprised by the moderator’s annoyance with her co-hosts, with “Whoopi saying she can’t do that with them anymore!"

Fans have been vowing to boycott the show and demand Whoopi be “fired” for her “tone deaf” comments.

En janvier, Whoopi got into hot water with fans after she claimed the Holocaust was not “about race.”

Elle était briefly suspended from the talk show, though viewers haven’t forgiven the actress for her remark.