A YOUNG man who thought his cough was just Covid was shocked to find out the truth.

Alistair Gibson now says Covid “saved his life” despite initially masking the fact he had a life-threatening disease.

The 23-year-old was suffering with a persistent cough in March 2021, but couldn’t get a face-to-face GP appointment.

In the August, he tested positive for Covid and, coughing up blood, contacted his doctor.

It was thought he had long Covid or pneumonia, and was referred to hospital for checks.

Alistair, from Inverness, who plays American football, was then told that in fact had a cancer called Hodgkin lymphoma – and it was at advanced stage four. 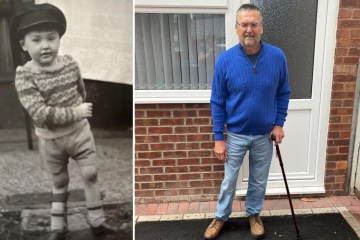 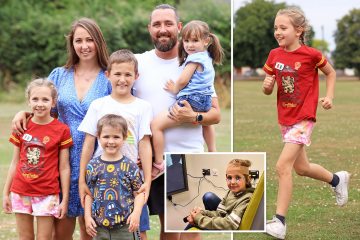 The rare form of cancer, diagnosed in around 2,100 Brits each year, develops in the lympathic system around the body.

The sheriff court officer told the Record giornaliero: “I sat down with my dad and the doctor who told me it was Hodgkins lymphoma and it was stage four.

“I was in total shock and disbelief. I even said to the doctor ‘Okay it’s Hodgkins lymphoma, Parleremo di un termine che suona stravagante cancro’ and he said that was exactly what it was.

“I then had an X-ray which showed cancer all over my body. All the cancer basically lit up the X-ray like I was glowing.”

Alistair said other than having a cough he felt well and had no other symptoms of Hodgkin lymphoma, such as a lump, night sweats, weight loss or high temperature.

“I couldn’t believe what was happening to me,” Alistair said.

“Telling my family about my diagnosis was the hardest part. I wanted to stay strong for them but telling my mum Kim it was stage four was incredibly difficult.

“My mum would come and see me in hospital and I’d put a brave face on for her but I’d break down the minute she left as I knew how hard it was on her seeing me go through this.”

During his first 21 day cycle of treatment he developed sepsi – a seriously life-threatening condition whereby the body overreacts to an infection and starts attacking itself.

He spent nearly two weeks in the intensive care unit (ICU) before returning to his chemotherapy sessions.

Alistair said: “The first cycle of chemotherapy just broke me. They gave me a high dose and I remember sitting in the hospital and my hair falling out in chunks.

“One night I felt horrible but thought it was just the chemotherapy acting. Then I got up about 3am and collapsed.

“I got rushed to hospital in an ambulance where they discovered I had sepsis. ho speso 11 days in the ICU.

“After sepsis, I was to start chemotherapy again and I remember sitting in the waiting room with my dad, Hughie, dicendogli, ‘I don’t think I can do this.

“‘I can’t go through with this anymore,’ and my dad just being in bits telling me I couldn’t stop treatment.

“I was the youngest in the ward by far and one doctor told me that I was the only one being treated for recovery, everyone else was being treated to slow their cancer down. That really hit me.”

After six cycles of chemotherapy, Alistair has been told he is cancer free.

Egli ha detto: “Two weeks ago the doctor sat me down after a routine follow up scan and said ‘Well it’s all gone’.

“If I’d never caught Covid then I’d never have found out I had cancer.

“In a roundabout way, catching Covid saved my life.”

Alistair refused to give up his coaching role in American football during his treatment and is now preparing to get back into playing.

Ha aggiunto: “I stayed pragmatic and continued to coach for our team. I couldn’t go to away games but I would watch back the videos of games and did all the tactical stuff.

“I really want to thank our team the Highland Stags who have been brilliant in supporting me. They all even shaved their heads and raised over £3,000.

“I also really want to thank Leanne from Teenage Cancer Trust who was with me during it all.”