WE had spent the day sailing – legs dangling over the side of the boat, drinking in views of the cleanest, clearest azure- blue waters.

As the sun went down we settled into loungers near the rooftop pool, cocktail in hand, and admired the boats bobbing about in the harbour.

It was as zen and tranquil a day as I can remember.

Majorca may be known for Palma’s chic shopping and culture and Magaluf’s full-on party atmosphere.

But in the small town of Colonia de Sant Jordi we found a very different, laid-back side to our favourite holiday isle.

On the south east coast, only 40 minutes from the airport, Colonia de Sant Jordi is a former small fishing village, popular with the Spaniards, many of whom have second homes here. 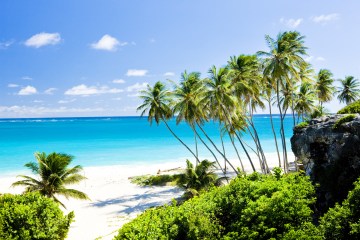 ESCAPE TO THE SUN

The best time of year to go to Barbados 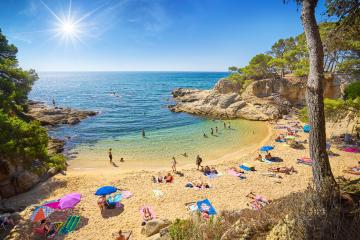 I was staying at the Hotel Honucai, a boutique gem right on the seafront, with just 76 rooms.

There’s a gym and spa but the star of the show has to be the rooftop pool and bar.

There you can enjoy yoga at sunrise, chill by the pool over lunch and then relax with sundowners at the bar by night.

The hotel’s Mediterranean decor is light, airy and modern and a lot of the ornaments are sourced from the island.

Man, 34, mauled to death by dog was ‘bitten after a seizure’

This theme carries on into the rooms, which are beautifully decorated and equipped with everything you need.

They boast spectacular sea views, complete with comfy outside sofas that are perfect for reading your book on (as I did).

But the hotel also offers adjoining rooms which would be great for those with children.

On Saturday evenings “The Top”, the hotel’s rooftop bar, has live music playing, as well as delicious cocktails served each evening.

The seats at the rooftop bar double up into daytime sunbeds, so you can catch the rays while taking in the views and enjoying a dip in the delightful plunge pool.

I ate some of the best fish dishes I’ve tasted, including scallop ceviche, tuna tartare and squid-ink croquettes.

I even had fresh tuna on flatbread, a traditional Majorcan speciality.

An extra treat was the chance to see a demonstration of the art of ­Ronqueo, the tradition of filleting gargantuan bluefin tuna — or red tuna as it is known in Spain.

The name comes from the noise the expert fishmonger makes as his knife cuts into the fish.

It was fascinating to see the technique used by the Ronqueo master as he carefully cut to ensure every part of the fish was perfectly prepared.

And while the hotel has so much to offer, there is also plenty to do nearby.

For a slightly different day out we visited Ses Salines d’Es Trenc to see how salt is harvested on the island.

Not only is the landscape breathtakingly beautiful, but I even got to take part in the collecting of the salt, before drying it and taking my own pot home with me.

We took to the waves with boat tour firm Nautica Colonia to explore Majorca’s dramatic coastline, stopping off in the clear- blue waters to swim and snorkel, while admiring some of the superyachts.

Also worth a trip is the fishing village of Cala Figuera, only a 20-minute drive from the hotel.

Every corner I turned opened into more breathtaking views of this idyllic port.

It’s the perfect day out for a stroll followed by lunch or a drink overlooking the water.

If you are after the feeling of sand between your toes then there’s a small beach just metres from the hotel.

And if you fancy exploring further, check out the clean sands of Es Carbo, easily accessed by following the coastal path.

Those up for an activity won’t be disappointed, with kayaking and paddle boarding also on offer.

So if you are looking for an authentic Majorcan holiday with culture, great food and amazing views, this hidden gem is just waiting to be explored.

GETTING THERE: Flights to Palma Majorca are from as little as £29. See skyscanner.net.

STAYING THERE: Rooms at the 4H Hotel Honucai in Colonia de Sant Jordi start at £60 per night. See hotelhonucai.com.