WORKING in end-of-life care is an extremely emotional job.

Looking after people in their final moments can be tough, but one nurse has said that some patients might actually surprise you.

Prendre à TIC Tac, hospice nurse Julie McFadden said one thing that happens in her job, occurs around a month before patients die.

Elle a dit: “People a month out from dying will start talking to dead relatives, dead loved ones, dead pets.

Julie added that this happens so often that it’s ‘not even a weird occurrence’. 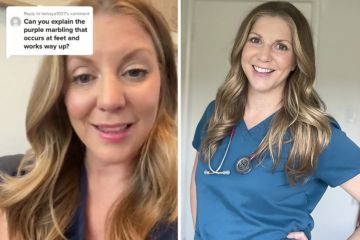 Another thing hospice nurses witness, Julie said, is the ‘rally’.

“People will look very very very sick and suddenly they will get a burst of energy, having a really good couple of days and then die suddenly after.”

The hospice nurse, based in the nous, added that another ‘crazy’ thing she has seen, is people telling you when they are going to die.

The expert explained that quite often, patients will say, ‘right, tonight is the night i’m going to die’, and that nurses will often laugh along as these patients don’t look to be actively dying.

“Then they do. They basically just choose when they are going to die.

“That doesn’t happen often, but I’ve definitely seen it a handful of times while being a hospice nurse for the past five or six years,” dit-elle.

Nurse Julie said she has also been with a person who was actively dying, by this she means someone who was ‘hours away from death’.

Then the next morning, she said they were ‘walking, talking and eating’.

“They lived for another three months and to me, I feel like I witnessed a miracle watching that happen,” dit-elle.

She also said that another sign that your loved one is about to die, is the death stare.

Le terme, which the expert coined herself, refers to when a “loved ones seemingly stares beyond you, or stares into the corner of the room or up to the ceiling,

“Sometimes they talk and say they see something but other times they will just stare,” elle a expliqué.