Huge crowds were seen queuing for buses in Londres while traffic built on roads outside the capital first thing.

Em volta 10,000 members of the the Rail, Maritime and Transport union (RMT) are staging a 24-hour walkout in an ongoing row over jobs and pensions.

Outro 1,100 members of Unite union are striking on the Underground, Croydon Tramlink, and Victoria coach station. 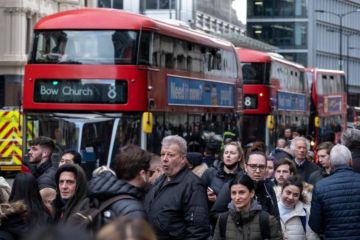 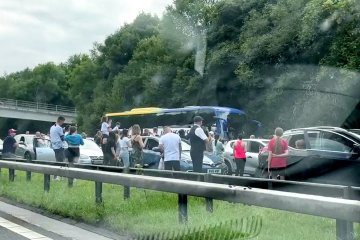 Ontem, tens of thousands of members of the Rail, Maritime and Transport union (RMT), Transport Salaried Staffs Association (TSSA) and Unite walked out, affecting Network Rail and train operators across the country.

Andy Lord, TfL’s chief operating officer, disse: “I would like to apologise to our customers for the strike action being carried out by RMT and Unite, which will have a significant impact on the city’s transport network.

“Customers should check before they travel from 18-21 agosto, as strike action is impacting different modes of transport each day.

“Para 19 agosto, we are urging our customers to avoid travelling on the Tube and only travel if essential on the rest of the network.

A spokesperson for the Mayor of London, Sadiq Khan, disse: “Discussions on TfL funding are ongoing with the Government, but TfL has been clear that nobody has or will lose their jobs because of the proposals previously set out, and that all changes are always subject to full consultation with staff and trade unions.