TOMMY FURY’S girlfriend Molly-Mae Hague has revealed she watched her partner fight on the SCREEN despite sitting ringside.

TNT extended his perfect record to 8-0 after outpointing Daniel Bocianski on the undercard of his brother Tyson’s WBC title defence against Dillian Whyte.

“I’m so proud. I’m so relieved. I don’t watch him. I watch the screen and that relieves the stress!” – @mollymaehague on being ringside for @tommytntfury‘s fights! 🥵#FuryWhyte | BT Sport Box Office ▶️ https://t.co/b0uV32kqC3 pic.twitter.com/7NDPTawHpk

The 22-year-old dropped his Polish opponent in their six-round affair, but couldn’t stop him inside the distance.

He subsequently once again called out YouTuber Jake Paul for a fight after their December bout fell through.

His girlfriend has spoke of her relief at his win, while stating she was left with nail marks in her arm due to the stress of watching him compete.

Speaking to BT Sport after the victory, Molly-Mae said: “I’m so proud, I’m so relieved and I know he will be too.

MOST READ IN BOXING 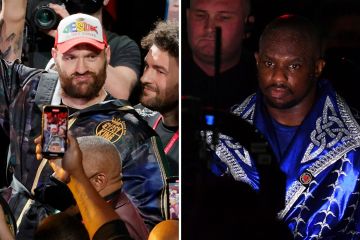 Latest updates from Wembley Stadium with a record 94,000 watching on

“We waited so long for that moment and now we’ve got the win we can relax and actually be a couple again because I feel like I’ve not seen him for two months now, so it’ll be nice!”

Asked how she feels watching Tommy fight, she remarked: “I don’t actually watch him, I watch the screen, that’s my way of dealing with it.

“I think to watch him in the flesh, it feels much harder, so I watch the screen and that relieves a little bit of the stress.

“But I’ve got nail marks in my arm from where I was digging in, it’s just horrible.

Most read in boxing

“I wouldn’t wish it on my worst enemy honestly, the fear of watching your person in the ring, it’s not nice, it isn’t.”

Molly-Mae was then pressed on what she and her beau will do to celebrate, to which she replied: “Well we’re going away for a holiday to America for his birthday.

“So we will be looking forward to that.

“He’s written me a list of all the places he wants to eat at because he’s so excited to eat.”

Fury’s rival Paul has since slated his performance, where he hinted he could now pit his wits against someone else.

He said: “Congrats on beating a 10-1 fighter. But that stadium was empty. When I fight the stadium is full.

“When Tommy fights no one gives a f***. And that’s in his home country. Let’s see how Anderson Silva’s event does.”