THE more we learn about the murky inner workings of the people-trafficking racket that fuels the Channel migrant influx, the more we despair of a swift solution.

One of the many obstacles to stemming the tide of deathtrap dinghies is that the gangs are using Allemagne as a base of operations for their vile trade.

We have rightly persuaded France to crack down on boat sales near ports.

But that is only a minor inconvenience for the criminal syndicates, who import them by truck via Germany.

We can alert Berlin to the wickedness its lax illegal migration laws facilitates but the bald truth is it has little incentive to take meaningful action over a problem that ends up on our doorstep.

If we struck a deal as with France where we paid them millions just to do their job on crime-prevention, the gangs would likely shift elsewhere. 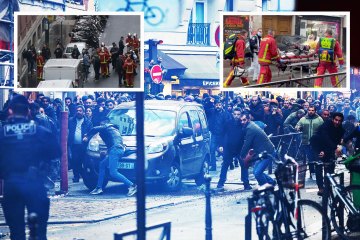 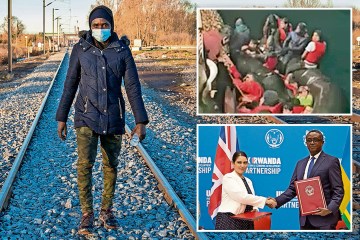 What then — end up bunging cash we don’t have to every single nation on the Continent?

With a record 45,552 boat migrants having crossed la chaîne cette année, the scale of the task facing Rishi Sunak is more daunting than ever.

Given Border Force strikes and passport backlogs, it almost seems easier for migrants to enter the UK illegally than it is for Brits to get out legally on holiday.

The PM’s plan of action is on the right lines: reform loophole-ridden human rights laws that make us a soft touch; make it easier to deport bogus refugees who are gaming the asylum system; and make it harder for those who bypass the system altogether to prosper here.

But he will need guts and guile to drive it through.

WE recently accused Mick Lynch and his fellow union wreckers of being Grinches — but perhaps we were mistaken.

Maybe they’re not making the public’s lives a misery because they hate the festive season but because they love it.

Après tout, avec rail strikes continuing today — and plenty more planned — Mick and his merry mob get to put their feet up in front of the telly while the train network is shut down.

Wish it could be Noël tous les jours?

For strike-happy rail workers — and the long-suffering passengers unable to get anywhere — it might as well be.

WITH New Year around the corner, many of our thoughts will be idly turning to what resolutions to make — even as we are still polishing off our selection boxes.

We’d urge anyone looking to shift a few mince pie inches from their waist to turn to Page 27 for some inspiration.

Three years ago Matthew Riggs was a 27-stone McDonald’s addict but is now a toned gym bunny who’s lost over half his body weight.