PERCHED on Bournemouth’s West Cliff sits new hotel The Nici, putting the cat among the seagulls with its Miami South Beach style.

It’s the beginning of November and I’ve driven down in a storm. But as I walk into the foyer of the hotel, I’m instantly transported to much sunnier climes.

Good-looking staff (surely poached from First Dates Hotel?) are there to park my car, grab my luggage and offer me a cocktail.

I spot palms (both faux and real), Andy Warhol-style pop art, and in a nod to Miami’s Cuban connections, on the wall there is an impressive collage of freedom fighter Che Guevara made from cigar holders.

In my sea-view suite, I find a retro cocktail cabinet with a decanter of complimentary Cuban rum, and a free-standing tub in which to drink it.

Often voted one of Britain’s best-loved seaside towns, Bournemouth’s vast golden sands rank in the top five in Europe, but the town itself was due a little shake-up. 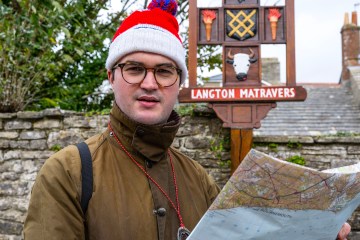 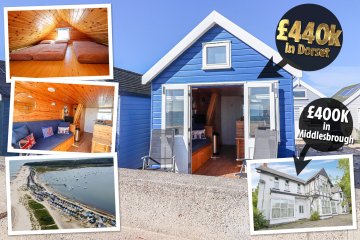 WISH YOU WERE DEAR

I head down a zig-zag path that cuts a swathe from clifftop to beach, where huts (first popular when the Victorians flocked here in the mid-19th century) line the beach.

Those who wish to descend sedately can hop on the West Cliff Railway (a cliff-hugging funicular), built in 1908.

Among the beach huts, looking more Californian than Dorset, is The Seaside Environmental Hub, a £2.4million development built using recycled materials, which will open in the spring of 2023 and includes a café and events space.

Most read in uk travel

Dates and times of the Edinburgh Christmas market

This is when the Manchester Christmas markets start

But it does have great views to the Isle of Wight to the left and to Old Harry Rocks (three immense chalk formations) to the right, and is a great spot to watch the surfers in action.

It’s a mishmash of design (think Scottish baronial pad with Japanese/Moorish/French twists) and is filled with the treasures the couple amassed on their travels, plus Merton’s impressive art collection, including a painting by Rossetti.

Alum Chine — a chine is a steep-sided dry river valley — is a sub-tropical enclave that leads into the town.

It is brimming with plants brought back from faraway destinations including the Canary Islands and Himalayas in the 1920s.

The stylish department store Bobby & Co is the highlight here.

It reopened last year after a restoration taking it back to its 1915 glory and is now a champion of local artisans.

I discover skin care brand L’Organiq (it may sound French, but it is made down the road — try its grapefruit and ginger range), coastal-inspired prints from Bournemouth artist Yaz Baxter and New Forest rhubarb gin from Wyrd Spirits.

Don’t miss the retro ice-cream parlour on the ground floor or the gallery GIANT at the top.

Great independent restaurants in town include West Beach (a beachside favourite for seafood — try its mixed grill platter), and the green secret that is Urban Garden, tucked away by the side of Bournemouth’s pleasure gardens.

For a spin out of town, head to The Noisy Lobster at Mudeford Bay, with its sun decks, locally sourced fish, beach hut hire and posh Lobster Hatch takeaway.

To reach The Saltwater Sauna, which sits on the beach of nearby Sandbanks, I take advantage of The Nici’s complimentary green bicycles and pedal along the beach path, spotting Bournemouth’s famous feral goats that were put on the cliffs by the council to curb unruly vegetation.

Lovely Branksome Beach Café is a great stop for a cuppa before you strip off to steam in the sauna — which is best described as a chic shed with sea views.

In true Finnish style, I bask in dry heat before enjoying a bracing dip in the sea.

When another storm kicks off, it’s time to hole up at The Nici, order a Candyfloss (Plymouth gin, grapefruit and champagne) and slip into the hotel’s tiny though opulent velvet-clad 13-seat cinema to catch a film.

BLY DAAR: Double rooms at The Nici start at £175 including breakfast but check out the website as there are often special offers.

UIT & ABOUT: Bournemouth’s Christmas Tree Wonderland, including festive market, ice rink and illuminations, is on now until January 2.