WE would love to share the Government’s optimism that its new £63million bung to France will slash the migrants landing ­illegally on our shores. But we can’t.

The success or failure of those new cops, drones and intel will be very obvious, very soon.

But we suspect the sole winner will be President Macron, not only thanks to the millions we are paying but because he can pause this co-operation any time Britain annoys him.

Binnelandse Sekretaris Suella Braverman says the small-boats problem has “no silver bullet”. That is because we are trying to fix it with both arms tied.

We will not override the EVRM en Human Rights Act which prevent us flying migrants to Rwanda or a British territory for offshore processing.

Either would be an immediate deterrent. 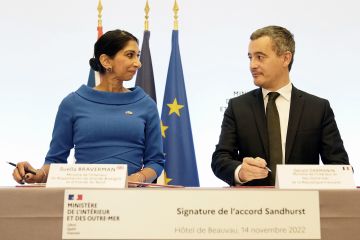 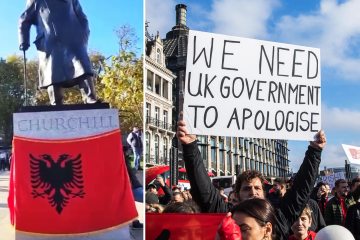 The crisis could only worsen by handing Labour’s Yvette Cooper control of it.

Her new alternative plan is staggeringly feeble and vacuous:

Treating almost all arrivals as “refugees”, wibbling about more co-operation with Europe and laughably declaring that the “unethical” Rwanda policy failed — when it was entirely untested before left-wing lawyers killed it without a single flight taking off.

Using holiday parks to house migrants will not stop traffickers

For the sake of themselves and the country, the Tories better had be.

A SUGGESTION for Jeff Bezos soos hy seeks to give away his £107billion Amazon ­fortune: Hand the lot to Chancellor Jeremy Hunt.

We’re not sure how a man whose mega-corporation emits more CO2 than Griekeland and who flies to space for fun can pledge with a straight face to tackle global warming.

But a few billion into our depleted coffers could fund two or three nuclear power stations and slash our reliance on gas.

As for unifying society, a few billion more would save us from Mr Hunt’s tax rises on Thursday. We’d all enjoy that.

And it’s only fair, sedert Amazon has spent years shifting its UK profits and finding legal ruses to swerve tax.

A prime opportunity to make amends.

IT was bonkers to consider cutting defence spending met war raging in Europe.

We know the parlous state of the finances.

Maar Putin’s invasion and China’s sabre-rattling over Taiwan have made the world far less stable.

So we welcome the deal struck by Jeremy Hunt and Defence Secretary Ben Wallace.