BOAT migrants flooding into Britain will be flown 6,000 miles to Africa for their asylum claims to be processed.

Home Secretary Priti Patel is in Rwanda where she will today reveal a multi-million pound partnership.

The move, aimed at deterring illegals from flooding into Britain, is part of a major new immigration shake-up.

At least one multi-million pound migrant processing centre will be set up in the North of England to save millions on hotel bills.

Asylum seekers will also be flown to Rwanda in a bid to stop them making the perilous crossing.

And the military will be brought in to patrol the Channel after yet another record day of arrivals.

In a landmark speech in Kent today, the PM will announce a string of policies to break the migrant smuggling gangs. 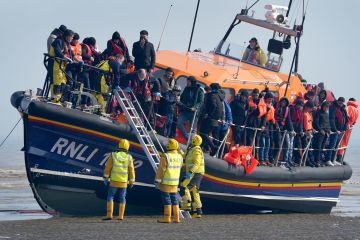 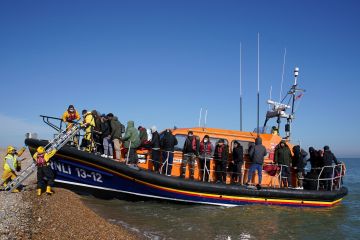 He will effectively fire the starting gun on the next general election campaign, thrusting immigration to the front of the agenda.

Ministers hope shipping illegal migrants thousands of miles away from their ultimate goal will deter them from trying to sneak into Britain by the back door.

Home Secretary Priti Patel flew to Rwanda yesterday to seal a deal with her counterparts in the tiny central African nation.

Ms Patel will today outline the landmark “migration and economic partnership” and visit an accommodation centre where thousands may be housed as she vows to fix our “broken asylum system”.

France could be next to QUIT the EU, Macron warns

The Sun understands migrants could be given cash or other incentives to stay in Rwanda, rather than try to claim asylum in Britain.

A source said: “Those who will be processed in Rwanda are those who arrived in the UK illegally. We will also have a Greek-style immigration centre, rather than spending large sums on hotels.”

Senior Government sources said the shake-up had been 18 months in the making, and they expect it to spark clashes with human rights lawyers. Ministers have introduced legislation to allow for offshore processing of asylum bids but are still preparing for a slew of claims under the Human Rights Act.

Local councils will be given extra cash to stop the Home Office forking out £4.7million a day putting asylum seekers up in hotels.

Last year 27 people drowned on a single day in the Channel when their ramshackle raft sank.

The PM will say “in the weeks ahead there may be many more losing their lives at sea whose bodies may never be recovered”.

And he will warn that crossing numbers could top a thousand a day in just a few weeks.

Mr Johnson will slam “vile people smugglers”, saying they are “turning the Channel into a watery graveyard, with men, women and children, drowning in unseaworthy boats and suffocating in refrigerated lorries”.

The PM will also claim ministers have done far more to resettle vulnerable people through safe and legal routes from Syria, Afghanistan, Ukraine and Hong Kong.

Mr Johnson will say: “We cannot sustain a parallel illegal system. Our compassion may be infinite, but our capacity to help people is not.

“The British people voted several times to control our borders, not to close them, but to control them.

The major new approach comes after years of failures and repeated bungs chucked to France to desperately stop the flow of boats.

The Home Secretary has repeatedly promised to get a grip on the escalating situation but the numbers have only swelled.

Ministers currently spend £1.5billion a year on our woeful asylum system. Hundreds of millions of pounds of British taxpayers’ cash has been sent to improve security in Calais and Northern France.

But that made little difference to the number of boats heading here.

More migrants are prepared to risk the hazardous boat trip after 39 Vietnamese people suffocated to death in a lorry in 2019.

The plan to shift migrants to Africa was slammed yesterday.

Enver Solomon, of the Refugee Council said “We are appalled by the government’s cruel and nasty decision to send those seeking sanctuary in our country to Rwanda.

“Sending people seeking asylum to be processed abroad will do absolutely nothing to address the reasons why people take perilous journeys to find safety in the UK.”

Labour’s Shadow Home Secretary Yvette Cooper branded the new scheme a “desperate and shameful” announcement to “distract from his (Mr Johnson’s) own law-breaking”.

She insisted: “It is an unworkable, unethical and extortionate policy.

“The Home Office is a catalogue of failure, from passport queues, to Ukrainian visa delays, to rising crime and falling prosecutions.

“Instead of getting a grip on the basics, all Priti Patel and Boris do is come up with wild and unworkable headlines. Britain deserves better.” 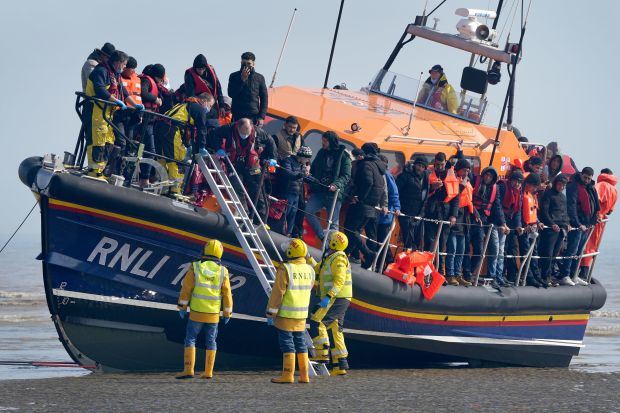 A YEAR-high 600 migrants tried to cross the Channel to Britain yesterday — and ministers fear the numbers will soar again this summer.

Dozens were seen arriving yesterday despite bad weather. Men, women and children as young as one were spotted at Dungeness, Kent.

The numbers are believed to be the highest this year — and nearly 60 attempted crossings were stopped.