POLICE swooped in to arrest eco-idiots who recklessly tried climbing onto M25 gantries for a FOURTH day.

Officers scuppered one woman’s attempt to get up, closing one lane for short period of time before opening them all again.

But part of the motorway has been closed both ways by Junction 8 near Reigate, Surrey, by idiots who managed to climb up. Officers are climbing up to deal with them.

Yesterday a police chief warned the selfish protesters that “someone will be killed” as a result of their disruption.

Essex Police tweeted just after 7.30am: “We have arrested a woman attempting to climb a gantry approximately 1.5miles before J28 on the M25 clockwise track.

“One lane was closed for a short time as officers responded to the situation. All lanes between junctions 28 en 29 are now open.” 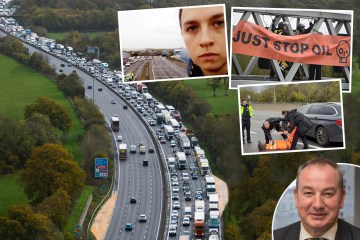 Just Stop Oil mob are worse than Millwall hooligans. Cops must get tougher 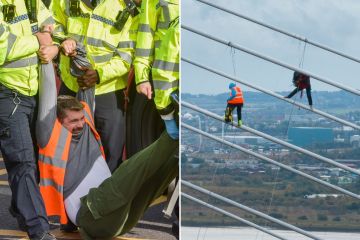 Surrey Police wrote: “Officers are on scene and dealing with activists who have climbed the gantry at Junction 8 on the M25. The road has been closed anti-clockwise.”

The Metropolitan Police this morning tweeted: “We’re ready to respond to any criminality on the M25 again today and will work quickly to minimise disruption and keep traffic moving.”

Yesterday a police motorcyclist was injured in a serious crash during the Just Stop Oil protests.

Essex Police chief constable BJ Harrington has warned it is “only a matter of time” before someone is killed because of the protests.

Hy het gesê: “It’s devastating. Our officers have been out there doing the best they can to protect the public and keep the roads moving.

“As a result of their bravery and commitment, one of them gets hurt.”

Hy het aan gegaan: “I think it is only a matter of time before somebody gets killed.

“The only way this is going to stop is if Just Stop Oil frankly grow up and realise they are putting people’s lives at risk.”